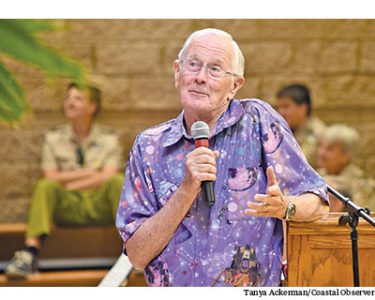 Charlie Duke was the 10th person to walk on the moon, and the youngest.

Charlie Duke may be 83, but he can still claim the title of youngest man to walk on the moon.

Duke was the lunar module pilot for Apollo 16 in 1972 and he and John Young spent more than 71 hours over three days driving a lunar roving vehicle around the moon’s surface conducting tests.

“We were really excited about being on the moon, I felt right at home,” Duke said. “There was no sense of danger, but it’s a very hostile environment because there’s no atmosphere. You need your [equipment] to work to stay alive on the surface of the moon. But it was just fun being there.”

Apollo 16 was the fifth moon landing and Duke was the 10th of 12 men to walk on the moon. Only four are still alive.

Duke discussed his moonwalk, his career with NASA, and his faith to a crowd of about 300 people at Belin Memorial United Methodist Church on Monday night.

Because of the landing zone of Apollo 16’s lunar module, Duke and Young could not see the Earth, which was directly above them.

“In an Apollo suit, the helmet is fixed and you’re just moving your head inside.” Duke said. “You look up and you’re looking at the top of your helmet. So we didn’t see it very much.”

His best view of Earth was while looking out the window of the space capsule on the way to the moon.

“It was the most beautiful, breath-taking sight I had ever seen,” Duke said. “This jewel of Earth … just hung like a crystal up there in the blackness of space.”

Before returning to the command module Duke left a photograph of his family on the moon, which was signed by all of them.

Duke didn’t have a spiritual experience during his space flight.

“I didn’t think I needed God, but I was wrong. We all need God,” Duke said. “But I wasn’t thinking about God. I was on my way to the moon and hoping [the spacecraft] holds together.”

Four years after walking on the moon Duke retired from NASA and became a businessman. His marriage to his wife, Dotty, began to struggle.

Dotty accepted Jesus Christ as her savior in 1976. Two years later Duke did the same and now they travel the world talking about their faith.

“God spoke to my heart and said ‘you’ve been playing church all your life, how about trying me,’” Duke said. “So I said, ‘OK Lord I give you my life.’”

For the first time in many years, Duke experienced peace in his life.

“As I became obedient to Him, things began to change,” Duke said. “Walking on the moon was great, but it was only three days. Walking with Jesus is forever. So that’s the best walk.”

The Dukes live in New Braunfels, Texas, near San Antonio. They have been married for 56 years and have two sons and nine grandchildren. Duke makes his living as a motivational speaker, for which he accepts compensation. His mission work is free.

“In the scriptures [God] says, tell your story and a be a witness. We’ve found as we share our story, it changes people’s lives,” Duke said. “My responsibility to God is to tell the story. It’s God’s responsibility to change hearts. Only He can do that.”

Duke was born in Charlotte and raised in Lancaster.

He went to a Baptist church with his family, but didn’t consider himself religious.

“I learned everything you could in church, but I didn’t know God, I didn’t know Jesus,” Duke said. “It was a distant relationship. He wasn’t in my heart.”

Going to church was a “ritual,” he added.

Duke graduated from the Naval Academy in 1957, but joined the Air Force because he wanted to be a pilot and the Navy wouldn’t clear him because of an astigmatism in his right eye.

“You don’t qualify for Naval aviation,” a doctor told Duke, “but the Air Force will take you.”

While serving as a fighter pilot in Germany, the Air Force wanted to send Duke to graduate school at MIT to study aeronautics and astronautics.

“I could have turned it down. I was having a great time in Germany flying fighters,” Duke said. “But if I had made that decision to stay in Germany, I never would have gone to the moon.”

At MIT, Duke worked on the guidance and navigation system for NASA’s Apollo program and met some astronauts.

“I’d never met anybody who was so enthusiastic about their job in my life,” Duke said. “How do I get that job?”

The astronauts told him his next step should be as a test pilot. He enrolled in test pilot school at Edwards Air Force Base in California, flying for Chuck Yeager, the first man to break the sound barrier.

“He was a great motivator,” Duke said. “A great teacher. A great commander.”

When Duke graduated in 1965, Yeager offered him a job and he accepted. One month later he saw a front page story in the Los Angeles Times that NASA was looking for astronauts.

“I answered a front page want ad and got selected,” said Duke, who became part of NASA’s fifth class of astronauts in 1966. “I took advantage of all that education.”

Before landing on the moon himself, Duke was part of the historic Apollo 11 mission. He was handling capsule communications in mission control when Apollo 11’s lunar module touched down on the moon and Neil Armstrong said “Houston, Tranquility base here, the Eagle has landed.”

Duke’s response was: “Roger, Tranquility, we copy you on the ground. You got a bunch of guys about to turn blue. We’re breathing again. Thanks a lot!”

“The voice on the other end was me,” Duke said, “with a Southern accent so maybe you can understand it.”

Even though it’s been 50 years since Apollo 11, Duke said it doesn’t seem that long because he’s always talking about it.

“It stays fresh in your mind,” Duke added.

Duke narrated a 12-minute video of his Apollo 16 mission, from liftoff to splash down, during the Belin event. The footage showed some missteps Duke took on the moon, including falling down and having a large piece of equipment break in his hand.

One of the most serious incidents on the moon occurred when Duke and Young tried to see who could jump higher. Duke lost his balance and landed flat on his back, where the control panel for his spacesuit was located. If that had broken, Duke probably would have died.

“Zero gravity is a lot of fun, once you get used to it,” he said. “It was exciting being there. We never lost our excitement, we never lost our enthusiasm for being on the moon. We didn’t want to come back.”

While growing up in Lancaster, Duke and his family started visiting Pawleys Island before his father went off to serve in World War II. After the war Duke’s father bought a house in North Myrtle Beach with two of his cousins so the family vacationed there.

Dotty Duke’s family started vacationing in Pawleys after the war.

In the 1960s, the Dukes resumed vacations on Pawleys Island and attended All Saints Episcopal Church.

“We just made a lot of friends down here,” Duke said. “We love South Carolina.”

Duke would borrow a NASA jet in Houston and fly into the Air Force Base in Myrtle Beach to visit Dotty and the boys when they were staying at Pawleys.

Every year Dotty’s family rents three houses on the south end of Pawleys Island for a family reunion. His appearance at Belin was scheduled to coincide with this year’s reunion.