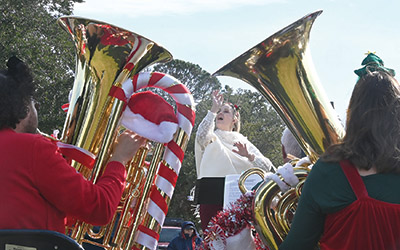 They followed their star and wound up in a field in front of Pawleys Island Community Church. For the 24 musicians, Christmas provides a chance to be a star.

“It wouldn’t be Christmas without TubaChristmas,” said Bill Loeb, who came from Calabash, N.C.

The church was one of five sites in South Carolina that served as venues for the 48th annual TubaChristmas. Performances are held around the U.S. and in Canada, Australia and Costa Rica.

Her horn itself would have drawn attention anyway. It was about 60 years old, with a rich patina under a thin layer of dust remaining from the music store where Thorup bought it.

But Thorup dressed herself as an elf and clothed her instrument in a coat of reindeer brown with a red nose in the middle of the bell and antlers rising above its rim.

She was celebrating the season and the chance to bring her instrument out of the back row where tubas and their kin usually provide the harmony.

“They started the event so we could have the melody,” said Joanna Hersey, a professor of music at the University of North Carolina Pembroke, who conducted the concert. She led another gathering of tubists near Raleigh, N.C., the next day.

Hersey was the principal tuba player for the Coast Guard band before pursuing a career in education and composing. Along with conducting, she was also a soloist at TubaChristmas.

The musicians order their music in advance from the Harvey Phillips Foundation in Bloomington, Ind. It was created to support music, particularly on instruments that don’t get much attention from other organizations. They meet for an hour of rehearsal before each performance.

“I love it because I’m the only tuba in the concert band,” said Dwayne Graham, who is president of the Pawleys Island Concert Band, which sponsored the TubaChristmas performance.

Adelyn Westendorf, 11,  played in her first TubaChristmas using a baritone horn that was a gift from her grandmother. She sat in the back row next to her uncle, Traver McArthur, who played a concert tuba.

That claim was borne out by the fact that Adelyn came from Watkins, Colo., for the event. There are five TubaChristmas programs in her home state, including one in Denver.

But to debut her new instrument, Adelyn and her grandmother, Kathleen O’Malley, flew east to spend time with their family, near Sumter. They stayed in Myrtle Beach and went to the Nights of a Thousand Candles at Brookgreen Gardens.

“It’s about fellowship and a chance to shine,” Graham said.