They grow up so fast – charter school marks its first decade 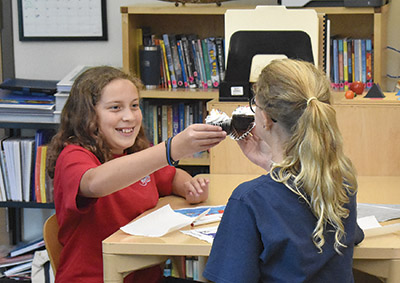 Coastal Montessori Charter School started as a dream of a dozen parents in December of 2009.

On Monday, students celebrated the 10th anniversary of the school’s first classes with cupcakes and a rousing rendition of “Happy Birthday.”

“The word that comes to mind is joy,” said Kristin Bohan, who led the effort to start the school, along with Rob Horvath. “I’m incredibly in awe that every time it’s been passed on to a new set of hands and hearts they’ve continued to love it enough to keep it alive.”

Bohan’s living room was the site of the first parents’ meeting. All in attendance had children enrolled at the private Pawleys Island Montessori School. Their tentative plan was to convert that school into a charter school. The goal always was to have a tuition-free Montessori school.

A year after that planning meeting, parents started signing letters of interest in February 2011.

The school board and the state approved the charter in July of that year for a school with 120 students.

“When you look back on it and say it’s been 13 years, it seems like a flash,” Horvath said. “But it seems now, because so many other things are going on in our lives and our kids’ lives, that seems like a lifetime ago that we were starting the school and going out to Columbia and getting the charter approved.”

Bohan praised the school district, the school board and former superintendent Randy Dozier for their support early on.

“We would never have survived without Dr. Dozier and some of the board members who agreed to hear us out in the beginning when we went and said ‘we just want to be one more option. None of us are going anywhere. This is not a fly-by-night thing. We love our community and we believe education is important, we love Montessori and we just want to make it a public choice so anybody who wants it can choose it whether they can pay or not.’”

Bohan called the experience of starting a school the best civics lesson she’s ever had.

“You go to your public leaders and say ‘I want to try, and I’m willing to put my blood, sweat and tears in it.’ They said yes and it gave me so much respect for them,” Bohan said. “I’m grateful for everyone that said yes. It would have been easier for them to just say no, but [they] said yes. I think about that now. That took a lot of faith in relationships. It took a lot of trust.”

By Jan. 1, 2012, enrollment was 144 and the charter board had to get permission from the district to expand.

Staff was hired and gathered to prepare for the first year in a wing of Waccamaw Middle School in July 2012.

“We were very cramped, but thankful for the start and thankful that they were able to provide a place for us to be,” said Kristy Harbaugh, one of five original staff members still working at the school.

The others are Tia Bergeron, Natalie Boggs, Hillary Usher and Jamie Williamson.

“It’s been amazing. I love it. I wouldn’t change it for the world,” Boggs said. “Just to see it grow and build from the beginning, is amazing.”

As the first day of the 2012-13 school year approached, board members used their own credit cards or guaranteed loans to buy school supplies and fixtures while waiting on a federal grant, which was delayed and not expected to arrive until October. Bohan personally appealed to the state Department of Education and the money arrived in July.

When Bohan volunteered at the school, she found herself wishing she had been a Montessori kid.

“They let kids learn by letting them discover. Doing it and seeing it and letting them stand back and say ‘wow, how did that happen?’” Bohan said. “It’s such an exciting way of just being alive in the world and absorbing so much knowledge.”

Usher touted the students’ ability to move around instead of sitting at a desk all day and make choices about their education.

“They can be part of the learning process and it doesn’t stop at the right answer. It goes past that,” Usher said. “It goes into why we do the things we do. It’s not just something on a test. It’s part of your life.”

Boggs said Montessori was the perfect education for her daughter Kiara, who is now a junior at Waccamaw High School.

“A lot of it is that they’re able to learn at their own pace,” Boggs said. “For my daughter, that was important to me. She was that child that no matter what you said to her, she was going to do it the way she wanted to do it. I knew it was perfect for her.”

One of the things that drew Harbaugh to the Montessori method was its mixed-age classrooms, which kept her children with the same teacher for three years.

“They don’t have that beginning of the year ‘don’t know who my new teacher is jitters,’” Harbaugh said. “Same thing on the teacher’s side. They know the kids. They know them very, very well by the end of the third year. Each year when the kids come back to school they just pick up where they left off.”

Horvath still gets chills when he passes the school, which moved into its own building near Alston Plantation in 2015.

“The beauty of it is, it’s continuing, we’ve handed off the torch, it’s thriving,” Horvath said. “I keep up with the school and I see they’re planning an expansion now. That’s just phenomenal to me. It’s not only continuing, it’s thriving.”

“I knew we’d make it. I always knew that we’d end up in our own building,” Usher said. “I’m so proud of what we’ve done and how we’ve grown and what we’ve accomplished.”

“The building is beautiful,” Harbaugh said. “We’re blessed to call it home.”

Maria Montessori would not want Bohan to say she’s proud “of” the school, but she is.