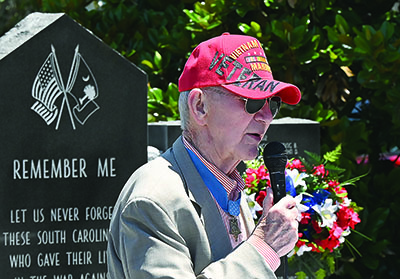 James Livingston remembered the knock on the door.

“I went several times and was involved with that knock on the door. I thought combat was tough, but when you stand up with a chaplain and knock on that door, folks, sometimes that’s worse than combat. That’s the most difficult situation that’s ever been presented to me during my life,”  he said at the Memorial Day observance outside VFW Post 10420 in Murrells Inlet.

Livingston retired from the Marine Corps as a major general after 33 years. He received the Congressional Medal of Honor for his actions in May 1968 as a company commander in Vietnam. That was just six weeks after the action for which he received the Silver Star.

“All of us are remembering today,” Livingston said. “Having been a commanding officer in Vietnam in ’67 and ’68 during the height of that war, I’m thinking today about those 41 young Marines and sailors who died in Echo Company, 2nd Battalion, 4th Marines, during that period and whose names are up on that wall in Washington,” Livingston said.

A Georgia native who now lives in Mount Pleasant, Livingston, 81, was a captain when he led the company in an attack on a fortified village in March 1968. A platoon from an adjacent company was pinned down. Livingston’s men were forced back twice by heavy fire as they tired to help. When a third company launched an attack, “he jumped to his feet during a heavy rocket attack, rallied his men and led them in an aggressive charge,” according to the Silver Star citation.

In the subsequent action, another Marine company was isolated when the North Vietnamese took control of a village. Livingston was wounded twice by grenade fragments while leading the attack.

He was wounded a third time and couldn’t walk when the enemy counterattacked. Livingston continued to direct his men and supervise the evacuation of casualties. Only when they were safe, did he allow himself to be evacuated, according to the Medal of Honor citation.

“It is a hell of a feeling, and I recall it, when you tell those young Marines like I did so many times, ‘guys, there are some real bad guys out there and we’re going down range. We’re fixing bayonets.’ But you know in those circumstances what happens? They think about their country, but most of all they look right and left and they think about their fellow Marines,” Livingston said. “That’s the greatness of our military, because we love one another. That’s what makes us special.” 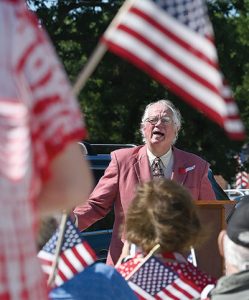 Barry Price remembered two things: hours spent talking with his uncle; two minutes on the phone with a friend.

He told the audience that gathered at the Georgetown County Veterans Memorial on Memorial Day that he was 6 when he realized that his uncle, Bill Merriman, was troubled. The family was on the beach at Pawleys Island. They gathered to eat, but Merriman was missing. They found him alone looking out to sea.

“He was weeping,” Price said. “He took his hand and moved it across the horizon. ‘I can see them. I can see them all.’ ”

His uncle served in the 29th Infantry Division in World War II. His company was in the fourth wave in the D-Day landing on Omaha Beach.

“I didn’t understand then, but I sure do now,” said Price, a local historian.

“There’s more than two kinds of veterans,” Price said. “I’m talking about those people who have gone to the battlefield and have suffered wounds, wounds for which there is no Purple Heart. Wounds that are deep and that last a lifetime.”

It was only in 2006 when Merriman was suffering from terminal cancer, that he talked with Price about D-Day and the campaign across France and into Germany.

“I’m so proud of what you did in the war,” Price told him.

After 62 years, Price said, his uncle still didn’t know why he lived when so many others had died.

The phone call was with his friend Sam. Price didn’t want to give his last name. They have been friends for 50 years. When Sam went into long-term care for Parkinson’s disease and dementia, the result of exposure to Agent Orange, Price started phoning him every day.

Over the years, Sam hadn’t talked much about his time as a Marine in Vietnam, but Price knew he had been in combat.

Three weeks ago, Sam was still on the battlefield he had left over half a century before.

“I talked to a man who was in heavy combat,” Price said. “It wasn’t a phone, it was a walkie-talkie.”

Sam screamed that his unit was surrounded and taking casualties. “He kept pleading,” Price said. “He was back in Vietnam.”

Price told him help was on the way. The phone went dead.

“We can never repay them, but every day of our lives we can live our lives so that we, by our actions, do in fact thank them,” Price said.