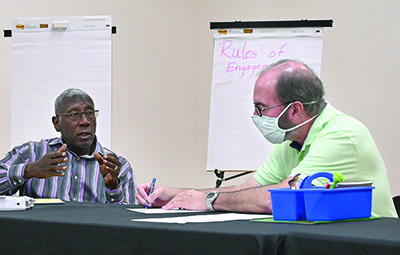 John Thomas won election as chairman of Georgetown County Council two years ago with a promise to provide “a steady hand, a calming influence.” In the first year, one of his six colleagues resigned after the county election commission ruled he didn’t live in his district, and the administrator and finance director announced their retirements. Year two brought the coronavirus pandemic.

Thomas hopes to serve another two years when the council selects its chairman next week.

“I’d like to continue to keep the county on an even keel for the next two years,” he said.

Thomas became chairman at the start of his second term on council after Johnny Morant retired after 25 years on council and 10 as chairman. Council Member Austin Beard planned to run for the position, but was under fire from the local chapter of the NAACP, who learned that Beard was living in Georgetown, not in his council district.

“It started out being not much fun,” Thomas said. “We were being attacked at every council meeting. It was aimed at the chairman, a lot of it.”

What he didn’t realize at the time, Thomas said, was how much the functions of the council relied on Morant and Sel Hemingway, who had served as the council chairman before being hired as administrator in 2008.

“That stability was no longer there,” Thomas said. “The role of the chairman changed because the makeup of council changed.”

Hemingway announced in May 2019 that he planned to retire. At the time, Thomas called the decision, “a startling surprise.”

The search for a new county

administrator dragged on for 10 months. Thomas was among the minority who supported Ray Funnye, the director of Public Services, for the job. But he joined a unanimous council in the decision to hire Angela Christian. That decision in March 2019 came two weeks before the county reported its first case of COVID-19.

In addition to a new administrator and members who had been at odds over the hiring, the council had to operate through virtual meetings. “There was a difference in the feeling of the meeting when we were doing it by Zoom,” Thomas said.

Since May, they have met in the Howard Auditorium, spreading out across the stage. And in the fall, Christian brought the council members together for a series of workshops that started out with a team-building exercise.

“Angela is outstanding,” Thomas said. “She came in at a really terrible time.”

He has talked with the other council members. None expressed interest in serving as chairman, Thomas said, including Lillie Jean Johnson, the longest serving member and its vice chairman.

The county expects to face a tight budget this year as the effects of the pandemic-driven recession are added to lingering revenue shortages and pressure to increase services.

Thomas hasn’t developed any specific goals for the council. “It’s been enough to try to deal with the issues as they come along,” Thomas said.

But stability is important, and much hinges on the rollout of the coronavirus vaccine, he said.

“The goal that I could identify was to keep the county’s governmental services running through the pandemic,” Thomas said. “I think we did pretty well with Angela’s leadership.”