Top anglers return to county in search of $100K prize 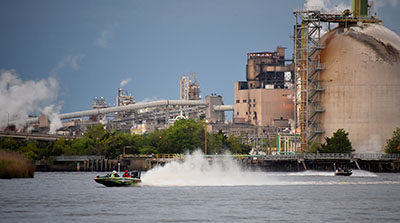 Anglers set out at 7 a.m. for each day of the competition.

Georgetown County’s five rivers will be full of fishermen angling for a $100,000 jackpot starting Thursday, as the Bassmaster Elite Series returns to the area.

The series is the highest level of professional bass fishing tournaments. Georgetown is the fourth stop of 10 this year.

Anglers will begin their day each morning around 7 a.m. at the Carroll  Marine Complex on the Sampit River. They can travel as far as they want as long as they’re back for the daily weigh-in beginning at 3:15 p.m.

The field of 75 anglers will be cut to 35 for Saturday. The top 10 will fish in Sunday’s championship.

There will be an expo Saturday and Sunday at the landing. The public can meet the pros at the Anglers Alley Saturday from 1 to 3 p.m. The pros will also conduct seminars.

The last time the Bassmaster Elite tournament stopped in Georgetown was 2016 and drew an estimated 27,000 visitors to the county. South Carolina native Britt Myers won the event and $100,000. Myers traveled all the way to the Cooper River in Wando to bring back 56.3 pounds of fish.

ESPN will broadcast a show about the Bassmaster Elite’s stop in Georgetown on May 12 at noon.

Bassmaster Elite held a tournament last weekend on Lake Hartwell in Anderson, which was won by Brandon Cobb of Greenwood. He led from day one and ended up with 72.4 pounds of fish. Stetson Blaylock of Arkansas was second with 68.11 pounds and Micah Frazier of Georgia was third with 63.6 pounds.

Drew Cook of Florida, who finished fourth at Lake Hartwell, is currently at the top of the standings for Bassmaster Angler of the Year and Rookie of the Year.

The county also hosted the Carhartt Bassmaster College Series in 2017.

The marine complex will also be the site of the Winyah Bay Heritage Festival on Saturday and Sunday.

Saturday’s activities begin at 10 a.m. and include magic shows, demonstrations by sheep and duck herding dogs and retrievers, a youth duck calling clinic, and a cast net demonstration.

Sunday’s activities begin at 11 a.m. and include the state duck calling championship, a waterfowl rescue lecture and a retrievers demonstration.

There will also be a kids zone, beer garden and vendors selling food, crafts, collectibles and equipment both days from 10 a.m. to 2:30 p.m.

A complete festival schedule is available at gtcounty.org.

Along with the fishing and heritage festival, the Georgetown Business Association will be hosting two country music concerts on Front Street as part of its Music in the Park series. Collin Raye will perform on Friday and Jason Michael Carroll will perform on Saturday. It’s the fourth straight year that Carroll has performed in downtown Georgetown.

Both shows are free and begin with opening acts at 6 p.m. VIP tickets, which include reserved seating and a meet-and-greet with the artist, are $50 per person, per concert. Tickets  are available at georgetownseaport.com.

For more information on all the events go to fishgeorgetown.com.