Panel sorts through $1.8M in requests for tax grants 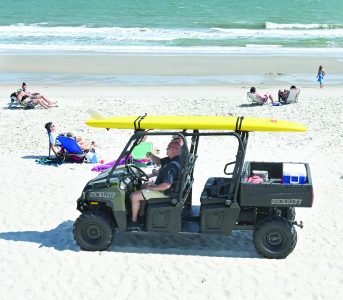 Officials are not sure how much money Georgetown County will get from the state accommodations tax, but more than a dozen entities are ready to step up to help spend it.

Funds from the 2 percent state tax on short-term rentals are awarded annually to groups for tourism-related projects.

More than $1.77 million in requests were presented to the county Accommodations Tax Advisory Committee last week. The county received $989,000 from the state last year. This year’s amount is expected to be larger.

The committee is charged with recommending which requests get fully or partially funded, or not funded at all. The final decision is made by County Council.

The sheriff’s office and Midway Fire and Rescue asked for money to fund safety measures.

The sheriff’s request for $261,397 would pay for its beach patrol and increase the unit from three to four deputies.

Midway’s request for $11,400 would pay for its beach patrol, plus diving equipment that would allow firefighters to stay submerged longer during a water rescue in lakes and ponds.

The county Parks and Recreation Department asked for $81,869 to maintain beach accesses at Garden City, the Marshwalk and the Bike the Neck path.

Beth Goodale, the director of Parks and Recreation, said the amount of trash this year is more than she’s ever seen.

The county has had to increase its budget for supplies, like plastic bags, by 25 percent and added pickups on Sundays and holidays.

The department has also had to reassign workers from other areas to help with trash. The county used to rely on inmates from the detention center to help, but the work release program stopped during the COVID-19 pandemic. Once it started again, fewer inmates have volunteered for trash pickup.

“Trash hasn’t been at the top of the list,” Goodale said.

Litchfield Beaches Property Owners Association increased its  accommodations tax request by 5 percent over last year – to $73,350 – to deal with trash.

John Martin, a board member, said the group is already 15 percent over budget this year due to a rise in trash left at walkways.

Ken Dewell said weather has taken its toll on the median landscaping in Litchfield, as has a fungus that destroyed 61 Indian hawthorns bushes and 27 pittosporums. Dewell said it will cost the foundation $12,000 to replace those.

The largest request came from the Chamber of Commerce on behalf of the county Tourism Management Commission, which asked for $699,401 for destination marketing. The chamber handles the marketing for the commission.

The chamber also asked for $71,500 to come up with a Hammock Coast destination strategic plan. Beth Stedman, president of the chamber, said similar research was done when the commission hired an ad agency to create the Hammock Coast brand in 2010.

A request from the county for $250,000 to upgrade lights in Morse Park on Business 17  raised questions with committee members, who asked whether the county could find another funding source or match whatever tax funds were awarded.

“It is supposed to be used for the promotion of tourism,” Joseph said.

Other requests: $100,000 for the Georgetown Business Association for Music in the Park, and to hire a full-time tourism and downtown development director; $54,000 from the Harbor Historical Association to replace the floor in the S.C. Maritime Museum; $23,000 from Prince George Winyah Episcopal Church to study preservation options for Prince Frederick Church in Plantersville; $15,000 for the Historic Bridge2Bridge Run; and $3,000 to The Village Group for the Tour de Plantersville.

The committee will meet again on Nov. 18 to come up with recommendations for funding, which will go to County Council on Dec. 14.