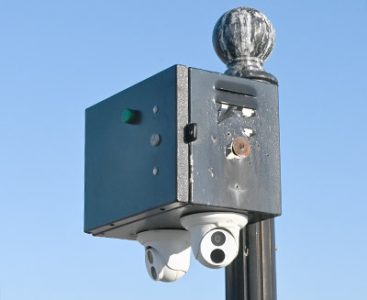 More cameras, like this one on the south end, will be installed on the island.

Two security cameras will be added on Pawleys Island using a portion of the money the town will save by reducing its police force by one officer.

Town Council voted last year not to fill the position when Sgt. Tracie Milligan retires this month. That will leave the department with the chief and two officers. The savings are $59,800 this year. The town also dropped plans to buy a new patrol car this year.

With three officers, the police will patrol the island at least 12 hours a day, down from 20 hours. The Georgetown County Sheriff’s Office will answer calls when town police are off duty.

“That’s what we said we were going to do if we cut back on coverage,” Council Member Rocky Holliday said.

The two locations already have street lights, which will provide electrical connections.

It will take about a month to install the cameras, Fanning said.

He also proposed a camera at Atlantic Avenue and Third Street, but that would take longer to install because there is no electric meter there.

Along with $11,500 for the cameras, the council added $35,400 to its budget for a pilot drainage project around Springs Avenue and Pritchard Street.

Although the projects will use of most of the savings from salary, benefits and equipment, council members said they expect future savings will be larger and help fund capital projects.

The security cameras are mainly used to help police with investigations, Fanning said. The town also has license-plate readers on each of the causeways onto the island. Those provide alerts for licenses listed in the National Crime Information System maintened by the FBI.

Council Member Guerry Green suggested the town encourage property owners to install their own security camera through a bulk purchase agreement with a vendor.

While the town could help with that, Administrator Ryan Fabbri said, the owners would be responsible for the monthly subscription for the security service.