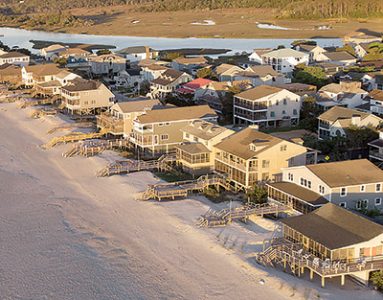 The second floor of new homes will be limited to 80 percent of the first floor’s living space.

The town of Pawleys Island will begin enforcing design standards next month that are intended to halt the spread of big-box houses. Town Council this week created an architectural review board that members say will preserve the “Pawleys Island look.”

The ARB and the guidelines it will use to review new construction follow a year of study by the Planning Commission. They received the support of former Mayor Bill Otis, who drafted a set of voluntary guidelines in 2004.

A south end property owner warned that the measure is unconstitutional. Barry Stanton, who is challenging the town’s efforts to obtain easements for beach renourishment on his lot and those of two neighbors, said the rules will create additional costs for property owners and expensive litigation for the town.

The key feature of the design code is a change to the town’s unified development ordinance that limits the second floor of a house to 80 percent of the heated square footage of the first floor. That will create a “story-and-a-half” look in common with many older houses.

The town already requires a 7-12 roof pitch, and will encourage a steeper 9-12 pitch. It will also recommend new houses avoid “stacked porches” and have porches around at least half of the first floor.

The ordinance requires new houses to get approval from the ARB.

In a concession to owners of small lots, the council agreed that owners will still be able to build at least 2,000 square feet of living space even if the house doesn’t meet the ordinance.

Also, council members, who approved the ARB plan unanimously, noted that the current ordinance allows owners to rebuild existing structures if destroyed by a disaster.

Otis told the current council that he has opposed an ARB for the island. He wrote a set of design guidelines in 2004 that were voluntary.

They didn’t work, he admitted.

“What has happened since 2004 shows that more time and money has been spent to create the maximum horizontal and vertical living space with little or no regard to appearance and its impact on Pawleys and its neighbors. Much of this subversion has been done to maximize rental income,” Otis said. “I really thought owners would not do what so many have done.”

Three owners of a house on the south end told the council in emails that they like the look of their house, even if it doesn’t look like those in the town’s historic district. “You will be taking all the charm out of what we have built and grown to love,” Jean Martin Grist said.

Stanton sent the council a 12-page letter outlining his objections. Preston Janco, the new town clerk, read most of the first two pages in the three minutes allowed for each public comment. Stanton questioned the need for the guidelines and the process by which they will be enforced by the  five-member ARB.

“It appears that earnest, generous work has gone into it, as well as some Town expenditures. I would like to see some of the referenced features in the future,” Stanton said. But he added, “the amount of work that has been put into an unconstitutional, ill-conceived and otherwise bad idea is no reason to enact it into law.”

The ARB and the guidelines take effect July 1.