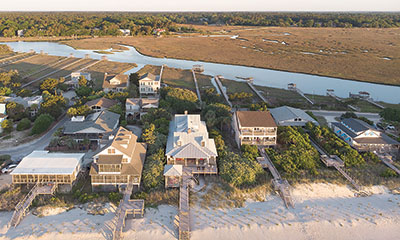 Pawleys Island will ease into a set of house design guidelines that are headed toward final approval next month.

Town Council last week week gave the first of two readings to an ordinance that will create an architectural review board that will have to sign off on all new house plans and a requirement that will limit the second floor of a house to 80 percent of the space on the first floor.

The ARB’s decisions will be based on a set of design guidelines that the council will adopt by resolution. Those include features that define “the Pawleys Island Look.”

The ARB proposal was recommended by the town Planning Commission after a year spent looking for ways to discourage construction of “big box” houses. The town already limits houses to 4,000 square feet, but officials are concerned that the distinctive style of island beach cottages is disappearing.

The council did not invoke the pending ordinance doctrine, which would have let the town enforce the rules before final approval. “That would be a little heavy-handed,” Mayor Brian Henry said.

He also said that people who have house plans in the works will be allowed to seek building permits without the ARB approval.

“The goal of the ARB is to be as flexible as possible,” Henry said, not punitive.

Administrator Ryan Fabbri told the council this week that one permit was issued last month for a new house whose owners wanted to start work before the design rules kick in.

The town currently requires the main roof of a house to have 7-12 pitch (rising 7 inches for every 12 inches of width). A proposal to require a steeper 9-12 pitch was changed to a recommendation by the Planning Commission.

The commission had second thoughts, but was unable to get a quorum last week for a special meeting to review its decision.

The council also agreed to keep 7-12 the standard, fearing it will be hard for owners of narrow lots – typically 40 feet in width – to comply.

In approving the 80 percent limit on second floor space, Council Member Rocky Holliday said he wanted the town to do an analysis of the impact on small lots.

He acknowledged that the traditional style is to have second floor rooms with dormers, but said that was from a time when families were content to put the kids in those upstairs rooms under the roof.

The council also wants to get a better idea of how much leeway the five-member ARB will have to grant exceptions to the guidelines.

The ordinance allows exceptions for unusual conditions on a lot and hardships, provided the house still has a “traditional” design and the house won’t diminish the character of the town.

Since the commission approved the plan, the word “and” was added to the four conditions, meaning all the criteria must be met.

“What we’re talking about here are not necessarily black and white issues,” Holliday said.

The council will hold a public hearing before final reading on the measures.