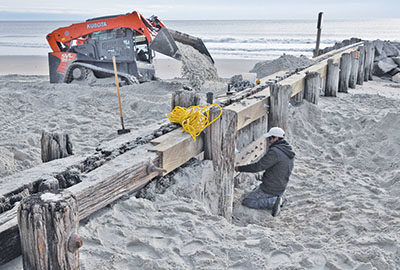 Repairs on 22 of the island’s groins were made this winter. The town hopes to cover them with sand in the fall.

Before the federal government will put 850,000 cubic yards of sand on the beach at Pawleys Island, 113 property owners have to put signatures on an easement. The town is racing against the calendar to get those signatures by the end of the month so the project can start in the fall.

Town Administrator Ryan Fabbri said he has about 70 signed easements, which will provide access to the Army Corps of Engineers to do the work along the island’s south end. “Others have made arrangements to stop in and sign,” he said. “I’m optimistic.”

The town has a meeting with property owners scheduled for Saturday in the Pawleys Island Chapel to give them an update on the beach nourishment project and options for funding future projects that are required under the town’s agreement with the Corps.

But there will be no project until the town acquires the easements. “A lot of people don’t think that’s possible,” Fabbri said. That includes Corps officials, who questioned the town’s timetable.

With the easements in hand by the end of April, the project can go out for bid in July. The town hopes to start in November and have the work completed before the 2020 sea turtle nesting season.

The project also includes the beach north to Third Street, but that will be funded by the town and through a state grant. Easements are required for 116 properties in that area, which is classified a “betterment” to the Corps project. But they are one-time easements.

The perpetual easements for the south end refer to public use and access, which Fabbri said raises concerns that owners will be allowing beachgoers to walk under their houses to get to the beach. “Which is not what it says at all,” Fabbri said. “The majority of the easement area is in the public domain.”

There are 10 to 15 owners whom he hasn’t been able to contact. “It’s time to get creative, if that means getting in my car and driving to Columbia or Sumter,” Fabbri said.

The town also had to obtain easements for the project completed last year that moved electric and cable TV lines underground. There was one missing when the utility poles came down. One was left to serve that house.

With the Corps of Engineers, it’s all or nothing.

“I don’t make the decision, but eminent domain is certainly on the table,” Fabbri said. “That would definitely push it back” if the town had to take legal action to get easements.

The current estimate for the entire project is $21.8 million to put 1.2 million cubic yards of offshore sand on the island’s beach. The town will pay a portion of the Corps project, borrowing the money from the agency.

The betterment project cost is $5.1 million. The Corps had asked the town for a third of the $3.7 million cost for mobilizing the dredge that will be used for both parts of the project. The town balked.

“They agreed to take that out,” Fabbri said, saving the town about $1.1 million.

The town will pay its share of the cost from a beach management fund. How it will raise funds for future projects is under review by an ad hoc committee. Town Council agreed to hire a law firm to review its options for taxes.