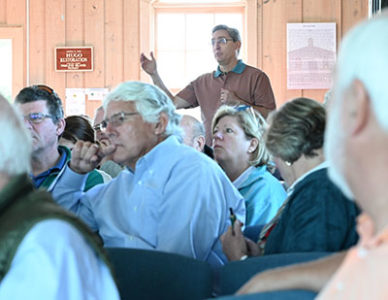 Bert Mills asks about the cost of future beach projects during the recent town meeting that filled the island’s chapel.

Pawleys Island property owners stopped short of debating how to pay for future beach renourishment at an Easter weekend meeting because the fate of a project planned for this year remains uncertain.

The town is 25 to 30 easements short of the 113 it needs from property owners on the island’s south end to allow the Corps of Engineers to move forward with a project that will place up to 840,000 cubic yards of sand on the 7,000 feet of beach.

“If we don’t get them, we’re not going to be going forward with the project,” Town Administrator Ryan Fabbri told a standing-room-only audience in the Pawleys Island Chapel.

The town has a deadline of April 30 for getting the easements. That will allow the Corps to put the project out for bid in July and start work in November.

“I’m not saying show up at their house with pitchforks and torches,” he added.

About 20 property owners turned in their easements over the weekend, Fabbri said this week. Another 10 told him the document was in the mail.

Only one owner has told neighbors he won’t sign. Fabbri said he hasn’t spoken to him in person, but plans to do so.

The perpetual easements give the public access to the renourished beach.

Some owners are concerned the public will be able to use their decks and cross to the beach under their houses.

“We’re not asking for access to your deck,” Fabbri said. “We have to put sand right up to your house.” That’s because there is no dune in some places.

With the new sand, that will be pumped from sites offshore, “we’re going to push the public at least 30 to 40 feet away from where they can go” today, he said.

The wider beach will protect the houses from storms and the agreement with the Corps includes funding for five renourishment projects over the next 50 years.

The initial project will also include placing 350,000 cubic yards of sand on the 8,800 feet of beach south of Third Street. That isn’t eligible for federal funds, but will done as part of the Corps project. The total cost to the town for both projects is estimated at $6.5 million out of almost $22 million.

The town has to pay half the cost of periodic renourishment for the south end. How it will raise the money is the focus of an ad hoc committee.

“Who pays for what? I think that is the big question everybody has,” Josh Ricker, who chairs the committee, said.

He said the options include a property tax, a parking fee and additional beach access to qualify for more federal funding.

“There really is no way to do this with a single solution,” Ricker said.

While he and Mayor Jimmy Braswell emphasized that no decision has been made on future funding, officials left no doubt the renourishment will move forward.

“The only thing that is going to derail this is not getting the easements,” Fabbri said.