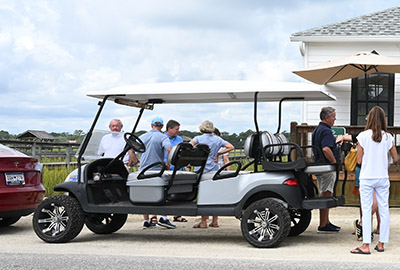 The town charges a $10 annual fee for golf cart permits.

The town of Pawleys Island has put a freeze on golf cart permits while Town Council considers whether to raise the annual permit fee, currently $10.

“There’s a lot of work involved,” Council Member Sarah Zimmerman said. “I think it needs to be considerably more.”

Pawleys Island once banned golf carts from the island’s streets, but a change in state law in 2012 put an end to local restrictions on the vehicles. The law allows them to be operated on streets where the speed limit is 35 mph or lower and up to four miles from the place where they are registered. Local governments can lower the range to two miles, which Pawleys Island did.

In 2017, the town also required that golf carts be registered. That ensures that people who operate them are complying with the state law on registration, insurance and operation of the vehicles. It also allows police to write parking tickets for golf carts without waiting for the operator to return. The state Department of Motor Vehicles doesn’t provide officers with registration information for golf carts the way it does for other vehicles.

The town issued about 700 golf cart permits last year. Most of those are for people off the island, including companies that rent golf carts to visitors. The rental companies used to get a discount, but that stopped this year.

The permits are valid for a calendar year, which is also the town’s fiscal year. Zimmerman raised the issue of fees after looking at line items in the budget with an eye toward finding money to raise police pay.

Fanning said they hope that will change as the town adopts an online application process.

“As far as the police department is concerned, it’s not a revenue-generating activity, it’s more of an enforcement issue,” he said.

The council was a month behind in approving the 2023 budget. It came up for a final vote this week. Changing the golf cart fee would require amending the existing ordinance through two readings.

“There’s a ton of issues associated with it, and we need to talk about it in a complete way,” Council Member Rocky Holliday said.

Neither opposed raising the fee, although Henry pointed out that some people have already renewed at the current rate.

Council members don’t have a proposed rate in mind, although Zimmerman said she wouldn’t object to $100.

In that case, Council Member Guerry Green said, the town should not issue any more new permits until it settles on a fee.

“We’ll have an avalanche,” he said.

There is a steady stream of applicants at this time of year, including one who arrived at Town Hall just before Monday evening’s council meeting.

Town Clerk Daniel O’Hara proposed letting people apply through the end of the month. “Some people may not always be as pleasant as others” when told they can’t  apply, he said.

But the council agreed to freeze new golf cart permits.

Fanning said he will tell his officers not to enforce the requirement that carts have a valid permit until the fee issue is resolved.

The $2.3 million budget approved by the council gives police a 7.5 percent raise. The town has used the Social Security Administration’s cost-of-living increase as its metric in the past, but council members have argued that’s unrealistic. Fanning pointed out there were never objections when the Social Security rate was zero.

The town gets more than half its revenue from state and local taxes on short-term rentals. Although that revenue has increased since the start of the coronavirus pandemic, bringing in  $1.37 million last year, the budget only projects $1.25 million this year.