Town objects to fee claim in lawsuits over beach easements 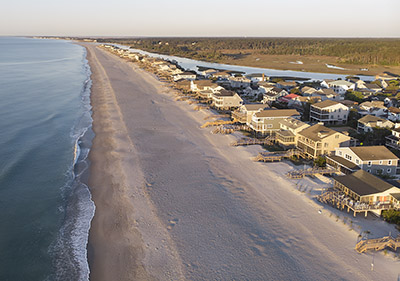 The town has easements for beach renourishment from 110 of 113 lots on the island’s south end.

The cost of challenging the condemnation of easements on three oceanfront lots was more than $180,000, according to the owner who represented himself and two neighbors in a year-long legal battle with the town of Pawleys Island.

The town says the cost is too high, since the owners didn’t get what they asked for in their three individual lawsuits.

Barry Stanton, a Columbia attorney who owns a house on the island’s south end, obtained a summary judgment in January quashing the town’s effort to condemn easements that would allow it to partner with the Army Corps of Engineers for future beach renourishment projects. The federal agency requires easements to conduct and maintain those projects.

The town received easements from 110 south end lot owners for a renourishment project that was completed in the spring of 2020. Although the town did the work without Corps, the agency is due to erect sand fence and plant dune vegetation this fall on 1.4 miles of the new beach. That will make the project eligible for future federal funding that town officials say is worth tens of millions of dollars. But any future project will require easements from the three remaining property owners.

Circuit Court Judge Michael Nettles ruled that the condemnation process that the town began in July 2020 was flawed and, therefore, invalid. He said the town could start the process again. Stanton filed a petition for fees and costs for just over $101,000. He noted in the filing that he was not seeking fees for representing himself.

This month, Stanton filed an amended fee petition that put the cost at $180,595 through the first week in October.

“The underlying premise of the Plaintiff’s claim is that $180,595 worth of legal time has been reasonably devoted to simultaneous work on three essentially identical matters,” Will Dillard, the attorney representing the town, said in a filing this week.

The records provided to support Stanton’s claim show that Stanton worked on the cases an average of 4.2 hours every day for over six months and for an average of 5.1 hours a day for a seven-week period.

“These numbers would represent an unreasonable expenditure of time even if the Plaintiff had obtained the permanent relief it was seeking,” Dillard said.

But he said Stanton and his neighbors, Frank Beattie and Sunset Lodge LLC, are no better off now than they were before the judge granted their motion for summary judgment.

The owners challenged the condemnation based on “fraud, bad faith and lack of necessity,” Dillard notes. They asked the court to prevent the town from ever condemning easements on their property for beach renourishment.

The court did not address those claims.

“The relief obtained by the Plaintiff can be fairly characterized as limited and temporary in relation to what the action actually sought to achieve,” Dillard said in his filing. “It is difficult to escape the conclusion that these procedural objections were raised as a tactical means and only because of the underlying substantive objections to the easement.”

The award of fees should reflect the limited nature of the results, Dillard argued.

“The most appropriate fee award to the plaintiff would be no award at all,” he said.

If the court decides to grant fees to the plaintiffs, Dillard said, it should not grant them for time spent working on the underlying claims of fraud, bad faith and lack of necessity or other issues on which the plaintiffs did not prevail.

In his claim for fees, Stanton said it was the town that drove up the cost of the litigation, seeking first to fast-track hearings then delaying the request for fees by asking the court to hear arguments on the request.

Town Attorney David DuRant said in a court filing it was Stanton who drove up the cost of the suits.

While his actions before Dillard took over the cases were based on his belief that the claims against the town lacked merit, DuRant said, “I also determined that it was in the Town’s interest to pursue a disposition of the case as early as possible because, frankly, I believed that plaintiff’s counsel would make even routine matters unnecessarily tedious, difficult and costly. This proved to be the case, as is illustrated by the numerous excessively lengthy filings that plaintiff’s counsel has submitted over the course of the action.”

DuRant also denied Stanton’s claim that the town engaged in a “public misinformation campaign falsely characterizing the controversy.” Even if it had, DuRant said, that wouldn’t have required the need for Stanton to work the hours he claimed.

The town also hired a Charleston attorney who specializes in eminent domain law, David Pagliarini, to review Stanton’s fee claim and other documents in the case. To provide context to the 950.5 hours that Stanton worked on the cases, Pagliarini said in a filing, “I consider a 2,000 hour billed year for a lawyer very difficult to achieve.”

Stanton spent almost half of that on one matter.

“In my experience, challenge actions of this nature with limited discovery and no trial can be successfully managed in one-tenth of the time claimed here,” Pagliarini said in his filing.

He also noted the length of the filings from Stanton, including the 57-page initial complaint.

“Not only are the pleadings largely unintelligible, but the sheer volume of information presented is wholly unnecessary,” Pagliarini said.

A hearing on the fee claim is scheduled for next month.