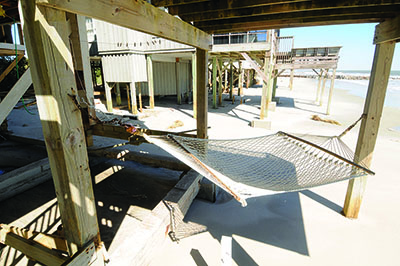 The south end after Hurricane Matthew, where a new dune now exists.

Sand fence and beach grass that were due to be placed along the south end of Pawleys Island next month will likely be delayed by lawsuits challenging the town’s efforts to acquire easements for beach renourishment, according to the town administrator.

“It’s disappointing given all the time and effort we’ve put into it,” Ryan Fabbri said.

The town completed a $14.3 million project in March that placed 1.1 million cubic yards of offshore sand along the beach from the south end to just north of First Street. An agreement between the town and the Army Corps of Engineers would make the southernmost portion of the project eligible for future federal funding if the Corps is allowed to participate in this year’s project by placing the plants and fence on 1.4 miles of beach.

The Corps requires the town to obtain easements from the owners of 113 beachfront lots to repair and maintain the beach in front of their houses. Three property owners refused to sign the easements and filed suit last week to block the town’s efforts to condemn the easements.

Frank Beattie, Barry Stanton and Sunset Lodge LLC argue that the easements are no longer necessary since the town completed the renourishment. They also say that the town failed to follow the procedure set out in state law for condemning property.

The town obtained appraisals that showed the value of the sand placed on the beach was $90,000 for each of the lots. The value of the easement was significantly less, so the town did not offer payment.

The owners, in their court filings, say the easements would allow the general public to have access to their property, which is not a benefit, “nor is public access generally considered beneficial to the value of property either subjected to it or even adjacent to it.”

The Corps was ready to move forward with its portion of the project once the final easements were obtained, Fabbri said. “We wanted to get all this put to rest before hurricane season,” he said.

As a Corps project, the agency will repair any major erosion damage as well as pay a share of the cost of future renourishment along the south end of the island.

“This is kind of an insurance policy. That’s the way I look at it,” Fabbri said.

The property owners specifically dispute that. “More in the nature of a lottery ticket than an insurance policy,” is how the suits describe the partnership with the Corps.

Fabbri said he was not able to comment on the suits. He did say he notified the Corps after the suits were filed.

If the town prevails, it will still be able to complete the agreement. “There’s never been an expiration date on this,” Fabbri said.

Town Council met online with Town Attorney David DuRant for nearly an hour this week to discuss the suit.

DuRant declined to discuss the case. “We have a strategy,” he said, adding that it would become apparent through court filings.

“We are aware of the lawsuit and are working to gather all the facts as quickly as possible,” Mayor Brian Henry said in a statement. “We will share information on our website and through regular meetings as warranted.  Rest assured, we are focused on pursuing the best interest of the town and the property owners.”

Under state law, the suits stay the condemnation procedure, which the town had hoped to complete this month by filing notices with the Circuit Court. That process would only have allowed the owners to challenge the amount of compensation offered.

“Challenges to any kind of condemnation are common,” said Scott Slatton, director of advocacy for the S.C. Municipal Association. “It doesn’t sound to me like the town is doing anything out of the ordinary.”

Since the suits challenge the town’s right to condemn the easements, the town will have to show that its action is for “a specific public purpose,”  Slatton said. “The public in this case is the public at large, for the benefit of the greater good, not for specific people to walk across their property.”