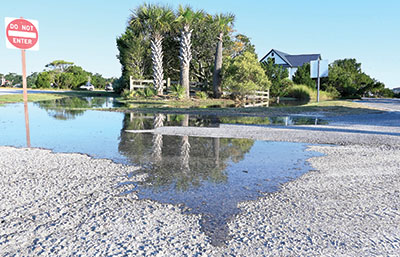 Water rises from the drain at the Nature Park on a high tide.

The town of Pawleys Island hopes to launch two pilot projects to deal with sunny day flooding that will use an innovative device to keep saltwater from flowing into its storm drains.

“I believe we could solve the king tide flooding and the normal flooding,” Council Member Rocky Holiday said. He took on flooding issues after they were identified as one of four focus areas in a strategic planning session this summer. “Luckily, we’re not reinventing the wheel.”

But the solution appears to be almost as simple. It is a cone-shaped rubber valve that uses hydrostatic pressure to restrict the flow of water in a pipe to one direction. While that can also be achieved with mechanical valves, the rubber valve developed by the Swedish firm Wapro allows water in the pipe to build up enough pressure to blow out debris. The design also allows water to drain from a pipe even when the outfall is submerged. 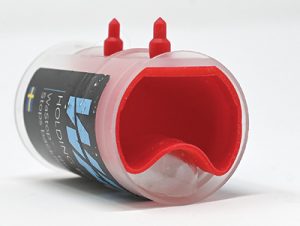 The rubber valve flexes at the bottom to allow water to escape.

The storm drains on the island end in the marsh along Pawleys Creek.

The Wapro valves are used in Charleston, Mount Pleasant and Wilmington, N.C. They fit inside the existing pipes, and the company is willing to loan some to the town for a pilot project, Holliday said.

Holliday talked with the senior stormwater projects engineer for the city of Charleston, who told him that cleaning the drains alone won’t solve the problem. Holliday also found a set of drawings of the current stormwater system, which is owned by the state Department of Transportation, that had been compiled by Howard Ward, the former chairman of the Planning Commission. It showed 49 drains.

Not all of them need backflow valves, Holliday said. But there are also areas on the island where stormwater collects because there are no drains, he added.

“Saltwater is by far the worst actor,” Holliday said. It damages vehicles, the roads and the landscaping.

At a workshop last week, he told council members that two long-time renters of a beach house he owns in addition to his own house said they weren’t coming back to Pawleys Island because of the flooding.

Holliday proposed a pilot project on Myrtle Avenue at the North Causeway, where a drain from Pawleys Pier Village and a drain from the Nature Park allow water from the creek to flow into the street. It would cost about $50,000 to clean the pipes and install backflow valves.

There are about 60 properties affected by flooding there, Holliday said, including his own. He thinks about half the cost of a pilot project could come from donations. “They’re motivated to find a solution,” he said.

Council Member Sarah Zimmerman lives at the corner of Springs Avenue and Pritchard Street, another flooding hotspot. “My corner has flooded ever since I was a little kid,” she said.

As a pilot project, Zimmerman asked, “would that be a better prioritization?” With only one drain it would be less expensive, she added.

“You want to do it at the place where, no pun intended, you make the biggest splash,” Holliday said, which would be the principle entrance to the island at the North Causeway.

“Why can’t we do all three” drains, Mayor Brian Henry said. With a public-private partnership, “we need to go where people are ready to roll.”

The drainage improvement will still leave the town with flooding when the water in Pawleys Creek rises over the edge of the marsh.

“Implementing those solutions, will probably not be quick,” Holliday said.