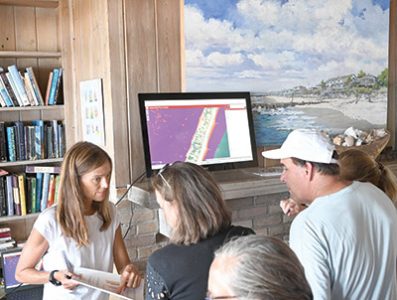 Nicole Elko, left, talks about the flood model to property owners after the civic association meeting.

The town of Pawleys Island will seek $210,000 in federal funds for drainage projects as it continues to study ways to address flooding caused by sea level rise. The town will be required to come up with a $70,000 local match.

“That kind of naturally puts a cap on how much we can ask for,” said Dan Newquist, the town administrator. “We’re trying to position ourselves where we have until the end of 2026 to spend the funds.”

That will allow the town to spread the cost out. A portion of the local match could also include staff time, Newquist said.

The town completed a pilot project a year ago around Town Hall that cleaned storm drains that carry water into Pawleys Creek and installed check valves that prevent creek water from backing up in the pipes.

“We’ve had pretty good success with that. We want to do more of that,” Mayor Brian Henry told the Pawleys Island Civic Association at their annual meeting over the weekend.

The grant application to the S.C. Infrastructure Investment Program will be for projects on Springs Avenue near Pritchard Street and for Myrtle Avenue between First and Third streets, Newquist said. The program received $900 million from the federal American Rescue Plan Act for water projects. Application are due Monday.

The town also plans to seek funding from the S.C. Office of Resilience for other drainage projects, Newquist said. It’s grant deadline is at the end of October. Unlike the infrastructure grant, the resilience grant doesn’t require a local match.

“We feel good about getting money like that,” Henry said. “That’s just scratching the surface of what’s out there.”

The town hired a consultant this spring to create a plan to adapt to sea level rise. The drainage projects address one aspect of that, said Nicole Elko, the coastal geologist who is conducting the study. She will also help the town develop capital projects to deal with long-term impacts.

“Two feet is the level Pawleys needs to start planning for,” Elko said. At that level, “40 percent of the roads on Pawleys are flooded. It’s a huge jump.”

With help from S.C. Sea Grant and the College of Charleston, Elko created an interactive map to show the impact of sea level rise on the island. It uses the same estimates as the National Oceanic and Atmospheric Administration maps, but has details to let owners see the impact on their property. Many lined up at the civic association meeting to look at the maps.

“We have heard and we have learned that Pawleys Island residents are extremely concerned about flooding,” Elko said.

She plans to complete her study by the end of the year. It will include recommendations for  “gray and green” infrastructure and a list of priorities that the town can use to seek other grants.

The Town Council created a strategic plan in 2020 that identified beach renourishment, creek silting and flooding as its priorities. The fourth element of the plan was funding.

“Where is it going to come from? I would say that the town right now is ideally positioned to pursue money,” Henry told the civic association. “Are we going to do a tax? I don’t know. Maybe. Don’t want to. Are we going to borrow money? Don’t really want to do that, either.”

But he said the resilience study positions the town to get grant funding for capital projects.

“There’s a lot of money out there right not that the town could go out and get if we just get our act together and pursue and write grants,” Henry said.

The town will also continue to seek easements from three property owners on the south end to make the area eligible for federal funding for future beach renourishment and repair, Henry said. It has easements from 110 other owners.

The three owners challenged the town’s condemnation in court.

“We’re going to work with these property owners the best that we can, but I can promise you we’re not going to stop,” he said.