Town seeks to catch a rising tide of funding 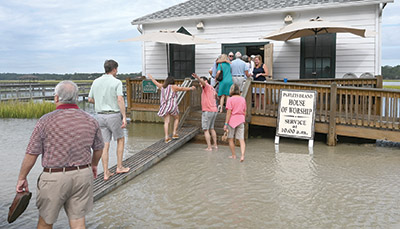 Members of the Pawleys Island Civic Association wade to the chapel at their meeting in 2019. This year they will be able to participate is the town’s resiliency study.

Fingers of salt water crept through the spartina grass and between the rocks. As the moon rose over the ocean, the water had the Pawleys Island Chapel in a soft embrace that was only disturbed when a passing car on Myrtle Avenue created a wake. That flooding last month on the highest high tide of the summer has become routine and prompted the town of Pawleys Island to look for solutions along with money to pay for them.

“Nobody is not concerned about flooding at all,” said Nicole Elko, a coastal geologist who is helping the town draft a plan to make Pawleys Island more resistant to flood and storm damage as sea level rises and a warming climate increases the intensity of storms.

The plan will enable the town to compete for federal and state grants to design and build mitigation projects.

“We’re not just thinking about capital improvement projects here,” Elko told the town Planning Commission last week. “We’re thinking about the broad spectrum, everything you can do all the way from ordinances to gray infrastructure projects.”

While gray infrastructure like roads and drainage systems is a component, Elko thinks the town’s best opportunities will come through green infrastructure, techniques that alter the shoreline, but also enhance the habitat. She and town officials are now at work to determine which solutions will appeal to property owners.

The survey generated 269 responses of about 500 properties on the island. Elko is still reviewing the data. She plans to map the location of the respondents’ property to show how it correlates with the island’s most vulnerable areas.

Elko worked with the College of Charleston and the S.C. Sea Grant this spring to create maps of flooding on the island. She will bring those to the annual meeting of the Pawleys Island Civic Association next month so property owners can see how they will be affected.

Pawleys Island completed a $14.8 million beach renourishment project in 2020 using funds it had accumulated over 20 years from its local accommodations tax, a state grant and a loan. Without a municipal property tax, the town has looked for ways to fund future renourishment and drainage improvements. Although the council cut some spending and reduced the size of its police force by one officer, it has only begun to rebuild its reserves.

But the shift from the beach to the creek puts the town in line to get funding through the National Fish and Wildlife Foundation, which was created by Congress to provide grants for conservation projects. In 2018, the foundation created the National Coastal Resilience Fund.

The fund expects to award $140 million in grants this year for projects that  “create and restore natural systems in order to increase protection for communities from current and future threats from coastal hazards and improve habitats for fish and wildlife species,” according to the foundation’s request for proposals.

“Without one of these plans, you’re really behind the eight ball in terms of competing with other communities,” Elko said.

She expects to complete her study by the end of the year. That will enable the town to  apply for a grant for “site assessment and preliminary design” in 2023.

The foundation has two other grants that fund design and permitting and construction.

The island faces two types of flooding: one from water that flows from the creek to the land through the drainage pipes and the other from water that overflows the banks.

Mayor Brian Henry said the town’s pilot project that installed backflow valves on pipes near the North Causeway has reduced the first type of flooding.

“We feel like we’ve got a pretty good plan to address what probably causes 80 percent of the flooding on the island,” he said. “If we had the money, we could do it.”

That would be a first step, Elko said, but she added, “if that’s all you do, then you aren’t going to be eligible for the grant. You want to take this big-picture approach, showing that we are prioritizing things in our resilience plans.”

Her study will look 30 to 50 years ahead, a timeframe which is estimated to see a rise in sea level of about 3 feet.

Flooding during Hurricane Matthew was about 2 feet, so Elko recommended the town plan for a higher water level.

Among the ideas she is raising with property owners is a “living shoreline,” which uses soft structures to raise the land on the edge of the marsh.

“Incentivized, nature-based techniques like living shorelines is something I’d really like to explore with you all. I think there’s some really good potential for that on Pawleys Island,” Elko said.

That kind of project would be most effective if it covered a group of properties.

“That’s the challenge,” Elko said. “That’s where we are right now with the marsh management side of things in South Carolina. We were there with beach renourishment 40 years ago. There wasn’t a mechanism for a community to come in and build a large-scale project.”

“We have to work with the state to get them to allow us to almost reclaim a bit of land,” Elko said. “Proving its resilience component is the trick.”

For now, her focus is on the island’s property owners. “What’s the pulse on Pawleys for this kind of thing?” Elko asked. She hopes to have a better idea after the civic association  meeting.