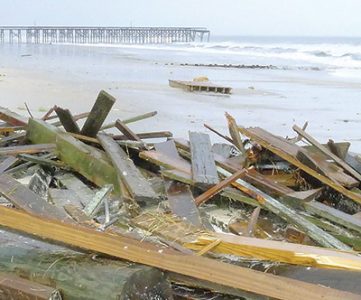 Much of the debris comes from Pawleys Pier, which was cut in half by the storm.

A contractor is due to start in the next week cleaning up debris strewn along the beach at Pawleys Island by Hurricane Ian. The work also includes pushing up a new dune along about 2,500 feet of beach from Pawleys Pier Village north to an area beyond Second Street.

Town Council this week approved spending up to $60,000 with the Robert Collins Co., a contractor based in Barnwell. The firm was one of three that submitted bids. It said it would complete the work in three weeks.

The sand scraping will cost $35,000. The balance will go toward hauling off debris. Much of that comes from Pawleys Pier, half of which collapsed during the storm. The town hopes Pawleys Pier Village, which owns the pier, will share in the cost of the cleanup.

Hurricane Ian made landfall Sept. 30 on North Island. The storm surge cut through the dune in several parts of the island. The state Office of Ocean and Coastal Resource Management issues an emergency permit for local governments in Georgetown and Horry counties to allow property owners to move sand from under their houses back to the beach and scrape sand from the beach to create a dune to protect property from erosion.

The town hopes to get reimbursed by the Federal Emergency Management Agency for up to 75 percent of the cost of the cleanup and repair. That requires a disaster declaration, which the governor can request when damage to public infrastructure exceeds $9.1 million.

The town initially wanted to do work on the south end of the island, but the 113 properties along 1.3 miles of beach are now part of a federal beach renourishment project. The town completed the work in 2020, but partnered with the Army Corps of Engineers for beach grass and sand fence in order to make the area eligible for future federal funding.

Repairs to the south end dunes beyond what property owners do themselves require the town to make a request to the Corps for help, Town Administrator Dan Newquist said.

The deadline to seek aid is Nov. 3. The Corps will come up with a report within 45 days to determine whether the sand loss justifies repairs.

“We need to follow the parameters of the Army Corps analysis,” Newquist told Town Council.

The agency review also includes a cost-benefit analysis, since its goal is to protect structures from storm damage, he added.

Mayor Brian Henry said the state Emergency Management Division cautioned that work needs to follow FEMA’s criteria in order to qualify for reimbursement. FEMA won’t reimburse the town for work on a Corps of Engineers project, he said.

The Corps sent a team to survey the south end beach four days after the storm. It will compare that data with a survey done for the town in August.

Newquist asked the Corps about replacing sand fence and beach grass if the agency doesn’t approve replacing sand. “They said there could be a cost-sharing opportunity,” he told the council.

If a disaster declaration is made, FEMA will reimburse the town for clearing the debris from the public beach. But Newquist said he asked the contractor to keep track of the debris that came from Pawleys Pier.

The pier was insured for $5.5 million and Henry wants the town to review the policy to see if it will cover part of the cleanup.

“They could use some of that insurance to clear the debris off the beach,” Caroline Alday said.

Jane Oliver pointed out that the pier has been damaged in the past, including by Hurricane Hugo in 1989.

It’s unfair to clean up private property with public money, she said.

“I question is it’s even wise to build the pier back,” she added.

The homeowners association has said it plans to rebuild the pier.

If the town asks the owners to share in the cleanup cost of the pier, Council Member Sarah Zimmerman said, what position would the town take on debris in Pawleys Creek?

“I think your question is a fair one,” Henry said.

The town wants the debris removed, but is unsure who is responsible. The state has also issued emergency permits for that work. The deadline to start work is Dec. 31.

“I think people should make a good-faith effort to clean up in front of their houses,” Council Member Guerry Green said.

But, he added that the town limit only goes to the middle of the creek.

There is also debris in the ocean, Henry said. It’s unclear who is responsible for removing it.