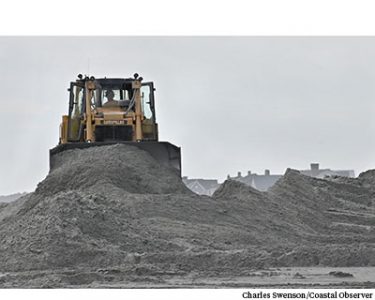 The survey asks about the importance of projects such as beach renourishment.

A survey went out last week to property owners on Pawleys Island as the town prepares to develop its first strategic plan.

“For us to go year to year and just react to what comes at us, I don’t think is efficient,” Mayor Brian Henry said.

The idea was proposed following last year’s contentious Town Council election by George Raftelis, a long-time property owner who runs a consulting firm that specializes in municipal utility finance. The council will work with Gerald Wexelbaum, a Florida-based management consultant, who was recommended by Raftelis. They once worked together at Ernst & Young, and Wexelbaum offered to cut his fee from $17,500 to $7,000.

The goal is to “create a cohesive vision” among the council members, establish priorities for the next few years, identify resources to address them and devise a way to measure progress, according to the proposal.

The first step was a survey that was sent out to about 700 property owners whose email addresses are on file with the town. Town Administrator Ryan Fabbri estimated that accounts for about 80 percent of the 550 properties on the island.

The survey asks participants for up to three items that complete the sentence “In five years, I would be delighted if Pawleys Island was known for … .”

They are asked to pick their four priorities from a list that includes keeping property taxes low; maintaining the beach; minimizing assessments; traffic; silting in the creek; environmental protection; public safety; beach parking and access management; disaster management and communications; showcasing the island’s history, culture and values; and flooding and drainage.

They are asked to indicate their three activities for the town from a list that includes: controlling costs; raising revenue for future projects; improving communications; enforcing regulations; enhancing building and zoning requirements; working with other levels of government; and assuring that the town staff and officials work as a team. Participants are then asked to rate how well the town is doing in all those areas except for raising revenue.

The survey asks owners to rate the importance of increasing property values and asks for up to three ways to raise values.

The survey asks participants whether their property is below the South Causeway, above the North Causeway or between the causeways and how long they have owned their property.

There is space for additional comments and, although the survey is confidential, participants can volunteer for a follow-up interview.

The council approved the survey last week in a 2-1 vote with Council Member Sarah Zimmerman opposed. She objected to paying $7,000 for the survey when the council cut pay raises for Fabbri and Police Chief Mike Fanning from the budget in December.

Henry initially told council there were anonymous donors who would be willing to pay for the survey. Last week, he said donors could cover the estimated $500 in expenses for Wexelbaum.

“This needs to be a little more transparent,” Zimmerman said.

While the donors might prefer to be anonymous, Henry said that would not be guaranteed.

The survey was developed by Henry, Raftelis and Wexelbaum and then emailed to Town Council members for review. Council Member Rocky Holliday added flooding and drainage to the list of issues.

Zimmerman objected to a line that asked property owners to rate the efficiency of town government. “Does efficiency mean Ryan’s job performance? I think that this is confusing,” she told Henry in an email.

Zimmerman also questioned the need to find out where the respondents’ property is located or how long they have owned it. “What difference does this make?” she asked of the time question. “Who has loved the island longer?”

Henry said last week that the survey is not intended to set the direction for town policy, just to provide a framework for the council’s discussion during a day-long retreat planned for March.

“It’s not going to 100 percent drive the decisions we make in terms of priorities,” Henry said.

Without knowing the location of the respondents’ property, “it’s a mashup and you don’t have granularity,” he said.

The retreat is scheduled for March 21. The site hasn’t been selected, but Henry wants it to be someplace other than Town Hall.

He also proposed the council hold a kick-off dinner the night before without spouses so “we can be business minded.”

That prompted Henry Thomas, an island resident, to point out from the audience that it would need to be open to the public. He is suing the town for violations of the state open meetings law.

“We’ll look into that,” Henry said.