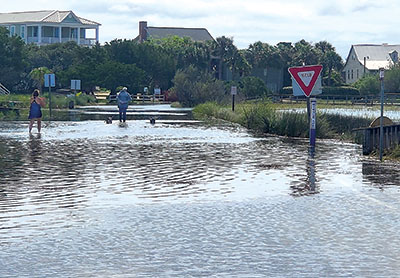 There are protests outside Town Hall. A lawsuit has stymied plans for future beach renourishment. The long-time town clerk has resigned.

Yet officials on Pawleys Island are moving forward on a list of projects that emerged from a strategic planning session this summer and the 10-year update of the town’s comprehensive plan.

Town Council expects to get a report next week from the Planning Commission about adopting architectural guidelines for new construction. Mayor Brian Henry and Council Member Rocky Holliday met this week to talk about a pilot project to deal with drainage problems.

Concern that the coronavirus pandemic had cut into town revenue from taxes on short-term rentals – something the council said last month called for a special meeting to review – has abated after a rosy report to the town’s Accommodations Tax Advisory Committee that tourism held up well in the late summer and early fall.

“So many things are in flux,” Mayor Brian Henry said. “It’s kind of an odd time for government.”

He has been under fire from the local chapter of the NAACP for a social media post that the group has condemned as racist. It has called on him to resign and held three rallies outside Town Hall. A march on the island is planned for Saturday.

Henry declined to comment on the ongoing situation with the NAACP, but has said he has no plans to resign and that he continues to work on town issues.

The town’s fiscal year ends Dec. 31, and the budget for 2021 isn’t likely to include any new revenue sources, Henry said. Finding ways to fund infrastructure is one of the four goals of the town’s strategic plan. The other three are the infrastructure itself: beach management, drainage and silting of Pawleys Creek.

Revenue, including taxes, is “a subject that’s very much on our minds,” Holliday said. “We just want to weigh those things.”

The biggest cost is maintaining the beach that was renourished at a cost of $14.8 million over the winter. The project placed just over 1.1 million cubic yards of offshore sand on 3 miles of beach. The town wants to enter into a partnership with the Army Corps of Engineers that will allow the federal government to fund repair and maintenance of the beach on the south end.

The Corps’ participation requires easements from oceanfront property owners. Three have challenged the town’s effort to obtain those easements, saying they are not necessary and that the condemnation procedure initiated by the town was flawed.

The partnership with the Corps is key to the town’s financial planning, Henry said. It will determine how much money, if any, the town can afford to spend on other projects.

“That’s in a little bit of a holding pattern right now,” he said.

The town’s effort to deal with drainage and flooding could get a boost from a state law adopted last week that creates an Office of Resilience to help local governments plan for extreme weather.

“I think it would be awesome if we could figure out a way to engage,” Holliday said. “It seemed a little bit more focused on the more inland properties.”

The law requires resilience to be made part of the town’s comprehensive plan, which is currently being updated.

“Our plan was to look at specific areas on the island,” Henry said. “The flooding is coming through the drains themselves.”

He and Holliday want to focus on one area and come up with some standard practices that could be applied elsewhere on the island.

Long term, he has proposed creating a berm along the creekfront on Myrtle Avenue, the island’s main road, that would serve to hold back the rising tide and as a bike and pedestrian path. He also wants to find out why the town’s roads, which are owned by the state, are lower than the two causeways that link Pawleys with the mainland.

The answer is likely to be money. It won’t be expensive to do a small drainage project that points the way toward solving a larger problem, Henry said.

He likened the approach to the one he took as chairman of the Georgetown County Planning Commission, when it revised the sign ordinance.

“People say it’s too late,” Henry said. “You’ve got to put a stake in the ground.”

That is the same approach he is taking with the architectural guidelines, he added.

While infrastructure costs remain a question, the town’s operations aren’t at risk. “The income is still going to exceed the expenses,” Henry said. While any surplus may be less than budgeted, he said, “it’s more than acceptable.”

The town will see some savings in its payroll costs, at least short term.

Diane Allen, who had been town clerk since 2005, left last month. She also served as clerk to the town court, and those duties will shift to the Georgetown County Magistrate’s Office, which currently provides the municipal court judge.

The town has received about 45 résumés, including some with doctorates. “I’m kind of shocked,” Administrator Ryan Fabbri said.

“It will be paramount that the person we hire for that position is focused on customer service,” Henry said. “It’s the face of the island.”