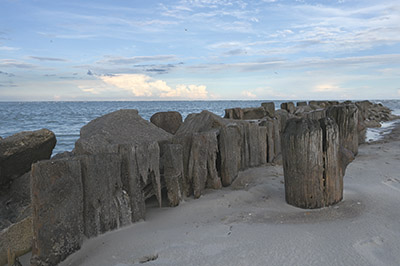 The jetty was built in the 1950s along with groins on the beach.

With its eyes on grant funding for infrastructure projects, the town of Pawleys Island will take another look at the jetty that has defined the island’s northern boundary for about 70 years.

The rock and timber structure is falling apart, Robert Moser, a north end resident, told the council this week. He has lobbied the town to address the issue.

This week, the council agreed to consider adding the jetty to a resilience study it commissioned in the spring. The study by Nicole Elko has focused on flooding from storms and sea level rise.

Council Member Rocky Holliday suggested that Elko, who has a background in beachfront management, could help find an engineering firm to assess the state of the jetty.

Elko is also helping the town identify grants that could fund infrastructure projects.

Mayor Brian Henry said he has looked at the jetty, which was built on the south side of Midway Inlet in the early 1950s by the state highway department along with a series of groins along the beachfront.

“It could become an issue,” he said.

The last time work was done on the jetty was in 1995, when the town got permission from state and federal agencies to dump concrete construction debris behind the wood structure.

In 2004, the town allowed the Assey family, which owned the property at the northern tip of the island, to create four oceanfront lots. The approval was conditioned on the owners acknowledging that the town was not responsible for maintaining the jetty.

When the town sought permits in 2014 to repair the groins, the Army Corps of Engineers recommended that the jetty be studied and repaired.

But the area was part of the federal Coastal Barrier Resources System, and no federal funds could be used for the work. The town tried to get the coastal barrier line amended. Former Mayor Bill Otis argued that the jetty should be grandfathered because it existed before the coastal barrier law was enacted.

The current map shows that the boundary of the coastal barrier zone runs along the jetty. That could bar the use of federal infrastructure funds for any repairs.

Newquist plans to talk with the corps and the state Office of Ocean and Coastal Resource Management about the jetty. If it’s destroyed, he said, “it might not be permitted again.”

Henry said he shared that concern.

“Then we’re scrambling,” he said. “We need to take a close look at it.”

The jetty’s decline has coincided with the migration of the south end of Litchfield Beach. A renourishment project at Litchfield this summer has raised concerns that additional sand could force Midway Inlet to migrate farther south.

“We have received several emails from property owners about that,” Henry said.

Property owners at Prince George filed suit against the town, its contractors and state agencies this year saying the Pawleys Island’s renourishment project in 2020 led Pawleys Inlet at the south end of the island to migrate and erode their property. The town has denied the claims.

Henry told the Pawleys Island Civic Association at their annual meeting this month that Pawleys Inlet has shifted north and south over many years, so it will be hard to prove that the renourishment is the sole cause of the current movement.

But he said the town is keeping an eye on Midway Inlet.

While the town decided not to fund a $20,000 study of the north jetty in 2015, it is now looking at grants that could pay for that kind of project.

The town submitted an application for a $210,000 state grant this week that will fund drainage improvements. It plans to apply next month for another state grant.

Henry said the grants are key for a town with an operating budget of $1.5 million.

“We’re not going to have a million dollars to throw at the north end jetty,” he said.

Also this week, the town agreed to notify Georgetown County it plans to terminate its contract for building permits and inspections. That meets a 90-day notice requirement, but won’t end the contract unless a new contractor is found.

The town has proposals from two private firms that could handle permits and inspections. The town Planning Commission has endorsed the change to help with enforcement of town regulations.