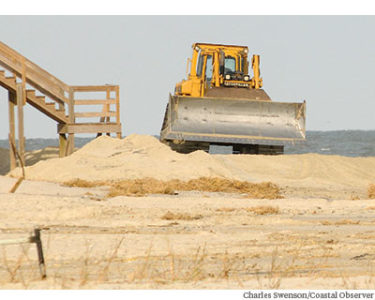 Work is scheduled to start on the south end on Oct. 1 and continue for three months.

Pawleys Island is poised to place the maximum amount of sand allowed under state and federal permits for a beach renourishment project due to start in just over a month. Town Council members who were concerned about straining the island’s finances to put 1.1 million cubic yards of sand on the beach at a cost of $14.4 million decided this week that spending the money now would provide more protection from storms and delay the need for future projects.

“We were not thinking about the life of these projects in the right way,” Council Member Rocky Holliday said. He chaired the committee that recommended the renourishment project in 2017.

Instead of doing follow-up renourishment every 10 years, the council believes it can wait 22 years to do another project if it starts with the 1.1 million-yard project. “We just weren’t thinking that way before,” Holliday said.

The town worked with the Army Corps of Engineers for a year on a renourishment project before deciding to continue on its own. That means giving up federal funding for the portion of the project on 1.4 miles of beach at the south end. The town was concerned that the agency would not fully fund the project or, if it did, would not complete the work before the end of another hurricane season.

Last month, Town Council approved a contract with Marinex Construction of Charleston to put 850,000 cubic yards of offshore sand on 2.4 miles of beach at a cost of $12.1 million. The town will spend $6.1 million from its beach fund and borrow $1.2 million. The rest of the funding will come from the state.

The price for sand under the Marinex contract is $9.25 a cubic yard for any sand above 700,000 cubic yards. The firm that designed the project, Coastal Science and Engineering, estimated that the price under a Corp project would be between $12 and $15 a yard.

But council members were concerned that even at the bargain price, if the town depleted its beach fund it wouldn’t be able to rebuild it in time to do the next renourishment project.

Also, the town wouldn’t have funds to repair any storm damage, although with a renourished and “engineered” beach it would qualify for federal disaster reimbursement.

This week, the council agreed that placing 1.1 million cubic yards of offshore sand on the beach, and raising its borrowing to $2.7 million, will pay off in the long run. It plans to take a formal vote next month.

“We’ve established what we call a trigger point,” Holliday said.

Coastal Science said 850,000 cubic yards of sand would give the town what it describes as an ideal beach. Once that volume erodes to 400,000 yards, the town will do another renourishment project.

Based on the town’s historic erosion rate, the smaller project would reach that level in just under 14 years. For the larger project, it would be 22 years.

“What you don’t want to do is get back to zero, the point you’re at today,” said Steven Traynum, the project manager for Coastal Science.

Former Mayor Bill Otis, who worked on a renourishment project over 22 years on the council, encouraged the current members to adopt the larger project. It not only provides property owners with more protection from storms, it delays the need for follow-up work.

“You’ve got at least a year or two to figure out how you’re going to deal with future funding,” he said.

By using 400,000 cubic yards as a trigger, any future projects won’t be on the same scale. Using the prices quoted by Marinex in 2018, in 22 years the town would be looking at paying $6.5 million for renourishment, Holliday said. Although he didn’t factor in inflation in the cost, he noted that it wasn’t included in revenue either.

That scenario also assumes the state will continue to offer funding for beach renourishment. Otis and Mayor Jimmy Braswell believe that is inevitable because of the importance of coastal tourism to the state economy.

“I think it is a reasonable assumption,” Holliday said. “This is a long-term problem that they can’t run away from.”

Also, the town is working with a Columbia law firm to draft legislation that will allow it to impose a property tax to fund beach renourishment. The town has never had a property tax and it requires approval from the legislature to create one.

Theodore DuBose, an attorney with Haynesworth Sinkler Boyd, told the council he is circulating a draft of the bill among the local legislative delegation and state environmental agencies. “It’s not impossible, but it’s not a slam-dunk,” he said.

The best hope for the town is to get property owners with contacts in the legislature involved in the process, DuBose said. Both houses of the legislature are up for re-election next year. That will make it harder to get a measure passed that amounts to a tax increase. “That’s just something you have to prepare yourself for,” DuBose said.