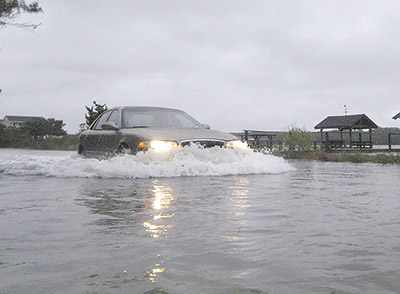 Flooding like this from the “1,000-year flood” of 2015 could be seen at normal high tides as sea level rises.

A 2 foot rise in sea level would make the extreme flooding seen on Pawleys Island during hurricanes a regular occurrence at normal high tides. Water from Pawleys Creek would cover nearly all of Myrtle Avenue north of the Bird’s Nest section along with the intersections to the two causeways that connect the island to the mainland, according to coastal scientists.

And that’s only under the mid-range projections for sea level rise from NOAA.

With another foot rise in sea level, the high tides would leave the property along the roads under water. The creekfront is more vulnerable to flooding because the marsh rises more gradually than the sand dunes along the oceanfront. Rising sea level means the ocean and the creek are more likely to meet.

“It is possible that Pawleys Island will be breached in multiple locations before 2021,” according to a report from Coastal Science and Engineering prepared for the town last year. “Under 3 feet of [sea level rise], the island would be at risk of breaching during a storm even around Pritchard Street; at 4 feet of rise, the same hazard will threaten the area around Pawleys Pier.”

Town Council this week agreed to pay up to $11,900 develop a plan to adapt to sea level rise. The work will be done over the next six months by Nicole Elko, who has a doctorate in coastal geology and runs a consulting firm in addition to serving as executive director of S.C. Beach Advocates. She worked with Georgetown County on its beachfront management plan in 2017.

He knew of Elko through the Beach Advocates and met with her last week along with Council Member Rocky Holliday.  Elko prepared similar plans for Folly Beach and Kiawah Island.

“Their issues at Kiawah and Folly Beach are very similar,” Henry said.

Pawleys Island has budgeted funds for a feasibility study of creek dredging. The council received a $46,000 proposal from Coastal Science, but the company’s scientists told the council that dredging would not improve the health of the marsh or increase the water flow through the creek.

At the same time, Holliday led a pilot project to repair and upgrade drainage around the North Causeway intersection with Myrtle Avenue. A similar project, using an innovative backflow preventer, is planned for the area around Springs Avenue and Pritchard Street.

“Are they perfect? Probably not, but they’re very, very effective,” Henry said.

But he added that they are also a piecemeal approach to a short-term flooding problem.

“We feel like we know what to do in fixing some of the king tides,” he said. Water that rises over the bank of the creek is “the bigger, more challenging, more expensive problem.”

Elko’s proposal to the town calls for identifying short-, medium- and long-term options to deal with flooding. Those would range from buffers and setbacks to seeking federal grants for pilot projects to major drainage improvements.

The sea level adaptation plan will “focus on flood mitigation opportunities along the marshfront,” Elko said.

In talking with Elko, “she made it incredibly clear that actual money is out there,” Holliday said. “To access the money, you’ve got to show them a plan.”

There are billions of dollars in infrastructure funds making their way to federal agencies and states through a law passed by Congress last year.

The schedule for the sea level adaptation plan includes creating maps that will show the impacts of flooding as water levels rise in 6-inch increments. The work will include public input through interviews and two surveys. A preliminary result will be reviewed with the Planning Commission and Town Council. A final plan will be available for council approval by the end of September.

“It’s a good place to start,” said Administrator Ryan Fabbri, who serves on the board of S.C. Beach Advocates. “No one knows more about coastal issues in South Carolina than Nicole.”