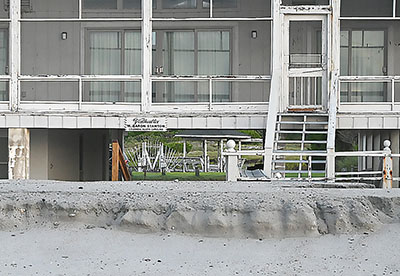 The town wants the owner of this house to post a bond while he challenges the easement process.

The town of Pawleys Island wants three property owners who are challenging its efforts to get easements for beach renourishment to post $10 million bonds to cover the cost of storm damage while their lawsuits are pending.

The motion in Circuit Court came a day after Town Council learned that about 30,000 cubic yards of sand placed on the beach over the winter was lost to Hurricane Isaias last week.

“With the devastation of previous hurricanes fresh in our minds, there is serious apprehension that all of the town’s beach renourishment activities, with a cost of $14,431,000, will be shattered and wiped out,” Town Attorney David DuRant said in a court filing.

The town placed 1.1 million cubic yards of offshore sand on its beach from the south end to just north of First Street.

The work was funded by a combination of the town’s beach fund, a $2.8 million loan and a state grant.

The town now wants to enter into a partnership with the Army Corps of Engineers that would allow the federal government to fund repairs and future renourishment on 1.4 miles of beach at the south end of the island. The corps requires the town to obtain easements from the owners of 113 oceanfront lots to do that work. It got all but three.

Frank Beattie, Barry Stanton and Sunset Lodge LLC filed suits last month to halt the town’s effort to condemn easements along the ocean side of their lots. They claim that the easements are no longer needed because the renourishment is complete, and they challenge the idea that the Corps can become a participant in the past project by installing beach grass and sand fence on the south end of the island.

In addition, the suits claim that the town failed to follow state law in the condemnation process.

As Hurricane Isaias moved toward the coast last week, the town filed a motion to dismiss the suits saying that even if the property owners were correct in all their claims, they don’t amount to “a valid cause of action” under court rules.

This week, the town asked the court to expedite a hearing and require the plaintiffs to post a bond.

“Hurricane season is already upon us and high winds and coastal erosion can negatively impact the town’s beach renourishment efforts and dissipate all the work that has been done,” according to the filing. Without the last three easements, “any damage to the beach will not be repaired by the federal government.”

The amount of the bond will cover the cost of damage to the renourished beach and public structures as well as “resulting loss and destruction of properties and businesses along the coast,” according to the town’s motion.

Most of the sand lost in last week’s storm was on the south end, said Steven Traynum, the project manager for Coastal Science and Engineering.

“The storm hit at absolutely the worst time,” he said, with the storm surge coinciding with the evening’s high tide.

The water rose over the top of the newly-formed dunes. In some places on the south end, where no dune existed before the project, the water broke through under walkways and stairs. “Those were the weakest points,” Traynum said.

But he told council this week, “there wasn’t any area that lost half the renourishment sand.”

Engineers are still refining the numbers, but Traynum said the largest loss in any area was about 10 percent. The estimate of 30,000 cubic yards for the entire island amounts to 2.7 percent.

The volume of sand and the shape of the beachfront will continue to change over the next two years. “Storms like this kind of speed up the adjustment process,” Traynum said.

On the north end of the island, he said the beach has widened since the project was completed even though no sand was placed there directly.

“The project did what it was supposed to do. It dissipated the wave energy,” Traynum said. Other than a few breaches, on the south end “there was really no damage at all.”

Town officials point out that this is only the start of the most active part of the hurricane season on the South Carolina coast. The damage from Isaias in the county and in the state wasn’t enough to trigger federal disaster aid. If it had, the town could have claimed 75 percent of the cost of repairing the beach from the Federal Emergency Management Agency.

Yet to get reimbursement, the town would first have to fund the repairs. It is concerned that it doesn’t have enough money in the beach fund and no way of raising money. It also doesn’t have a source of funds for future renourishment.

“The town is exposed to the risk of total destruction of the beach with consequent loss of millions of dollars spent in renourishment,” according to this week’s court filing, “not to mention the responsibility to carry out expensive repair and reconstruction tasks.”