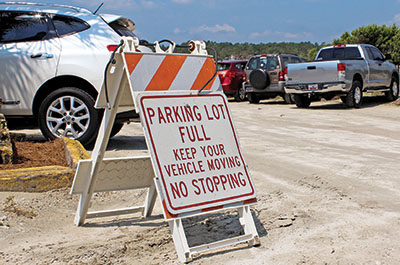 Georgetown County needs to take more responsibility for maintaining the parking lot and beach access on the south end of Pawleys Island, town officials say, even if that means charging for parking to cover the cost. With 80 parking spaces, the county-owned lot is the largest free beach access in the county.

The town provides a part-time police officer to manage traffic at the south end on weekends from Memorial Day through Labor Day. It has also repaired walkways and dunes damaged by storms. Braswell said the south end represents at $20,000 annual cost to the town at a time when it is looking at a projected $110,000 annual deficit in its operating budget.

Pawleys Island has never had a municipal property tax. A committee of town officials and residents is looking at the town’s finances for ways to balance the operating budget and provide funds for ongoing beach renourishment. The town plans to start pumping offshore sand onto over 2.5 miles of beach this fall. About half that work, on the south end, will receive funding through the Army Corps of Engineers. Those federal funds are available to the town because of the public beach access at the south end.

Braswell wants Georgetown County to pay its “fair share” of maintaining the beach access. “We’re providing a service and not getting anything in return,” he said.

If the county can’t maintain it, the town needs to consider a parking fee, Council Member Sarah Zimmerman said.

County Administrator Sel Hemingway said he doesn’t believe a parking fee would raise enough money to cover the expense. He will meet with Braswell and Town Administrator Ryan Fabbri to discuss their concerns, but Hemingway was doubtful the county would increase spending on the south end lot.

“We have people in Murrells Inlet saying they’re not getting enough,” Hemingway said, and he pointed to the list of speakers at this week’s County Council meeting who regularly say they aren’t getting enough services from the county.

At the town meeting, Council Member Guerry Green pointed out that the county pays for portable toilets and for trash pickup on the south end.

Fabbri acknowledged that, but said there is more that the town does. “If we’re going to do that, let’s get compensated,” he said.

The cost for the part-time police officers is about $10,000 a year, Fabbri said. “It’s necessary. It gets crazy down there,” he added.

Police Chief Mike Fanning told council the primary reason for the officers is to make sure that traffic moves through the parking lot and doesn’t back up on Springs Avenue or block access for emergency vehicles. “A side benefit is it has eliminated much of the crime down there,” he said. In the past, there have been car break-ins and disputes between drivers over parking spaces. Last year, one of the officers rescued a swimmer from drowning.

The county does pay half the cost of the security cameras the town installed at the parking lot, but Braswell said “it’s like pulling teeth” to get the money.

If the town stopped policing the lot, Braswell said the town could also eliminate one of the police department’s three vehicles. Last month, the town reduced one of its five full-time police officers to part time in order to provide raises for the other four. Only two will be on duty at one time during the regular schedule, and that will be on weekends, Fanning said.

“There’s no reason to have three vehicles,” Green said.

At the first meeting of the ad hoc finance committee last week, Green questioned the size of the projected deficit. “I’m a little skeptical of saying we’re in horrible financial shape on the operations side,” since the annual budget usually shows a surplus, he said.

Former Mayor Bill Otis, anticipating this week’s council meeting, told the committee “they have a couple of decisions to make about reductions in cost, and they are not insignificant.”

The council this week agreed to resume talks about the south end after Braswell and Fabbri meet with Hemingway.

Operations and beach management aren’t the only areas where the town has to find a source of funds. Council Member Rocky Holliday also pointed out the need to deal with increased flooding. The town created a committee to study the issue. Holliday urged them to come up with a timetable for developing recommendations, adding “if they’re not meeting that’s never going to happen.”

“The problem is, to start doing anything other than hand-digging a ditch here or there is going to cost us money,” Braswell said.