Town will push legislation to allow tax for beach work 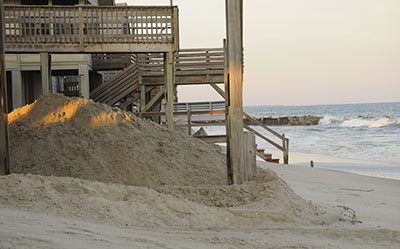 The town of Pawleys Island will seek to change state law in order to raise money for beach renourishment through a property tax. Town Council this week hired a law firm to draft the measure. It will have to decide whether it wants to champion a bill itself or hire a lobbyist.

The town hopes to start work this fall on a project with the Army Corps of Engineers to place up to 1.2 million cubic yards of offshore sand on the beach from the island’s south end to an area near Third Street on the north end. A 1.4 mile section on the south end qualifies for federal funds, but the town has to agree to pay half the cost of five renourishment projects over the next 50 years to maintain that beach.

Town Council also wants to continue funding beach renourishment for other parts of the island that don’t qualify for federal funds.

The town estimates it will need to raise $7 million to $9 million over the next 10 years to fund its share of ongoing renourishment for the south end. The town currently dedicates 80 percent of its local accommodations tax to beachfront management. That raises about $400,000 a year.

Pawleys Island has no municipal property tax. Under state law, the town would have to seek approval from the legislature to implement one.

After meeting last week with Theodore DuBose, an attorney with Haynsworth Sinkler Boyd who specializes in public finance, Town Council members said they favor his proposal to amend the state law to allow local governments, with an approved beach renourishment plan, to levy a property tax to fund it. That would avoid the limits state law sets on the tax rate for government operations.

The proposal would also allow the town to raise money before the project, rather than borrowing money and paying it back with interest.

“You start putting money in the bank,” Council Member Guerry Green said. “You can put restrictions on it.”

A committee was created this winter to look at a range of options for raising money. A business license was ruled out as too hard to implement. A proposal to charge for parking left the committee deadlocked. The idea also drew objections from people who live on the mainland.

The committee also considered a proposal for a new public access on leased land in the middle of the island. The access would make more of the beach eligible for state funds.

That proposal drew about a dozen nearby property owners to a committee meeting last month to voice their objections.

A property tax also drew objections, but Council Member Sarah Zimmerman noted that many who oppose a tax support an assessment for beach renourishment.

The legislation that the town will propose would create an exception to the current law that restricts the ability of local governments to raise taxes.

There are already several exceptions in place, DuBose said. One is written to benefit Chesterfield County. Another benefits Charleston, Richland and Sumter counties because they are home to military bases. None are mentioned specifically in the statute.

Council Member Rocky Holliday asked if there would be opposition to a bill that only benefits coastal communities.

“It’s a great questions,” DuBose said. He also works with the city of North Myrtle Beach. “I don’t personally know any reasons why people would be opposed.”

State Rep. Lee Hewitt said this week that the legislation might have traction if it provides a solution for other coastal communities. They now use a range of options to fund beach renourishment, but some are specific to those communities, like taxes in Myrtle Beach and Hilton Head.

“It is better that we all sit down and come up with a plan, and the Pawleys plan may be it,” Hewitt, a Murrells Inlet Republican, said.

But he said getting an exception passed “might be a tall order.” A bill is pending that would allow towns such as Pawleys Island that don’t have a property tax to establish one with a tax rate equal to 30 percent of its previous year’s operating budget. It faces some opposition.

“There are always people opposed to taxes for local government,” Hewitt said.

DuBose acknowledged that in his meeting with Town Council. Mayor Jimmy Braswell asked if it would help if the town held an advisory referendum on a beach tax.

“That might be something you could offer,” DuBose said.

Last summer, the town sent out an email survey to island property owners to gauge support for beach renourishment. There were 120 responses out of about 570 properties. About 80 percent favored a tax to fund beach renourishment, Administrator Ryan Fabbri said.

To increase participation, DuBose suggested the town arrange to include a survey in the property tax notices that the county mails out.

A show of support from property owners would be a good talking point as the town works to gather support for the legislation, Holliday said.

DuBose said it will also be important to have a cost and tax rate in mind.

That may prove difficult. “The whole thing is a moving target,” Fabbri said.

The cost depends on the volume of sand, the source and the availability of companies to do the work.

Legislation is only one option, but DuBose said it is the simplest and least expensive.

The town could create a Municipal Improvement District and allocate the cost of renourishment to properties within that district. That would require hiring a specialist in creating such districts along with a law firm.

DuBose estimated the cost at $100,000. “It’s a lot more expensive than us getting five lines of legislation,” he said.

Hewitt said he is willing to help the town with the legislation. He said lawmakers realize the impact of the beach. “Tourism provides an awful lot of money to the state that they get to spend in their district,” he said.