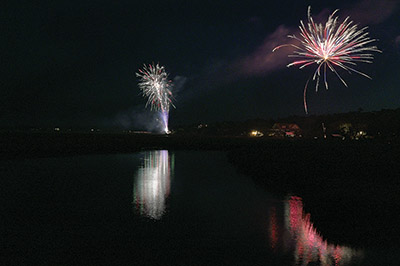 Fireworks shot from the mainland explode over Pawleys Creek on the Fourth of July.

The fate of a plan to stage a fireworks display over Pawleys Creek this summer is uncertain after Pawleys Island Town Council declined this week to give the event its blessing.

“Everyone loves fireworks. It’s our responsibility as Town Council to do what’s responsible for the town,” Mayor Brian Henry said. “I’m not saying it’s a terrible idea.”

Pawleys Island Realty wants to launch the display from a barge in the creek over the Labor Day weekend to mark the company’s 60th anniversary. A Lexington-based pyrotechnics company will handle the show, which Betsy Altman, owner of Pawleys Island Realty, said would cost $15,000 to $20,000.

“It’s something we would like to do to show our gratitude,” she told the council this week.

The company has been in the Altman family since 1970, when the late Linwood Altman bought it. He was instrumental in the founding of the town and served as president of the Pawleys Island Civic Association for 25 years.

The fireworks would actually be launched outside the town limits, so the council’s approval isn’t needed. The show will have state and federal permits and need approval from Georgetown County. But Betsy Altman asked the council for its approval.

“I’m trying to be a good neighbor,” she said. “I’m much rather have your blessing.”

Henry said he had concerns about the impact of fireworks on the creek and about the precedent the town would set. He acknowledged the company’s long-standing ties to the town and added that one council member, Ashley Carter, works for Pawleys Island Realty, and another, Guerry Green, rents his house to vacationers through the company.

“It’s not personal. We all feel positive about Pawleys Island Realty,” Henry said.

The town bans fireworks. Its ordinance makes it illegal to possess fireworks. The town waived the rules for a display that ushered in the year 2000. That was shot from Pawleys Pier using private donations, but organized by Pawleys Island Realty.

Council Member Rocky Holliday said he was concerned about the plastic and cardboard waste that would fall in the creek along with chemicals from the fireworks.

“That’s my biggest concern, my only concern,” he said.

Holliday noted that restaurants in Murrells Inlet have scaled back fireworks displays because of outcry over the environmental impact.

Green agreed and said he also worried about  the precedent.

Council Member Sarah Zimmerman supported the display and said she accepted the assurance of the pyrotechnics firm that “fallout and debris would be minimal.”

She said she wasn’t concerned about a precedent because no one has asked to do a display since 2000. The cost of the display makes it unlikely anyone else will do something similar.

Carter also favored the display. “I think it’s a great idea,” he said.

Altman said the date was picked because it coincides with the company’s annual reception for property owners and the Pawleys Island Civic Association’s meeting, which will be held this year for the first time since 2019.

The timing would also help reduce crowds coming to the island to watch the display, which she doesn’t plan to promote.

“I don’t want to make this difficult for the town,” Altman said.

She surveyed rental property owners and said only one of the 45 who responded was opposed.

Henry said the council didn’t need to vote since the shoot will be outside the town limits, but confirmed there were three members opposed and two in favor.

“The town is taking a position that we prefer not to shoot fireworks in the creek,” Henry said.

Altman said afterward that she will weigh her options.