Townhouse approval no surprise to opponents 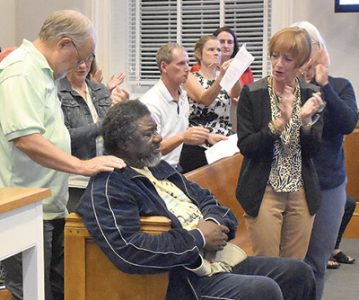 John Burgess gets an ovation after his appeal to the council to deny approval of the townhouse plan.

Several speakers berated Georgetown County Council for moving forward with a proposal to allow 90 townhouses on a vacant tract in Parkersville before John Burgess got his turn at the podium.

“I’m going be as nice as I can,” said Burgess, a long-time resident and leader in the traditionally Black community.

He paused, bowed his head and choked back tears.

The council voted 4-1 to approve a change in the “planned development” zoning for the 14.5 acres on Petigru Drive to allow townhouses on property that Georgetown County acquired for a technology park. A plan for 182 apartments on the site was withdrawn last year after community opposition.

The project is the third townhouse development to receive approval in the Parkersville area in less than a month. Neighbors and citizens groups filed suit in October challenging the approval of the two other projects, which total 88 units.

Andy Hallock, a member of the citizens group Keep It Green, acknowledged that the outcome of this week’s council vote was “predictable.” But he said the group has raised money to challenge land-use decisions “it believes are outside the law.”

“We’re not going away,” Hallock said.

Gary Weinreich, a member of Preserve Murrells Inlet, which joined Keep It Green in the recent suit, said “it’s just so sad that we can’t work together.”

Opponents cited drainage, traffic and the impact on the character of the community as reasons to deny the zoning change. They said a proposal to require 27 of the units to be rented at below-market rates for 15 years as a way to increase affordable housing was questionable.

Cindy Person, attorney for Keep It Green Advocacy, argued that the county is not following state law in approving developments or zoning changes.

“We’re not supposed to be changing our zoning ordinances to accommodate a developer’s proposal that doesn’t conform to our plan,” she said, referring to the county’s comprehensive plan. “That is backwards.”

Under the law, the zoning must follow the future land-use map in the comprehensive plan. Before the council approved the amendment to the planned development zoning, it changed the designation of the property on the map from commercial to high density residential.

Opponents also argued that Council Chairman Louis Morant and Council Member Raymond Newton should have recused themselves from voting because they serve on the board of the county Economic Development Alliance, which holds title to the property, and voted to sell it. The alliance is a nonprofit created by the county in 1978 to support its development efforts. It received a $950,000 loan from Santee Cooper to buy the property for a tech park. Georgetown County has made the payments on the loan.

If the alliance is a stand-alone organization, opponents argued that the council members who serve on its board have a conflict of interest.

“We’ve had our attorney take a look at that pretty closely,” Morant said.

The attorney, Jay Watson, said that there was no conflict unless the council members would receive a benefit from the property “beyond that that would accrue to the general economic benefit of the county.”

Morant and Newton said they would receive no extra benefit.

Council Member Steve Goggans asked Watson if he still believed the county was following state law in its zoning decisions.

“I’ve looked at that,” Watson said.

He started with a report prepared by Weinreich, based on interviews with planning staff in nine local governments along the coast, that found that only Georgetown County thinks implementing the comprehensive plan through zoning changes is optional and that it is not necessary to update zoning when the plan is updated every 10 years, as required by state law.

Watson said none of the town or county attorneys in those jurisdictions were aware of the report. He asked them the same questions Weinreich did.

“They concurred with me,” Watson said.

Council Member Bob Anderson was the lone dissenter.  He said the zoning amendment was flawed because the planned development zoning first approved for the property in 2008 had expired before it was amended in 2015 to allow the tech park.

“I’ve got some things to say,” Anderson said before the vote on the zoning change. He paused because people were filing out of the council chamber after the vote on the map change.

“You need to go ahead and say it,” Newton said. “It’s your people.”

“My people? They’re not our people?” Anderson replied.

“I call this taxation without representation,” he said.