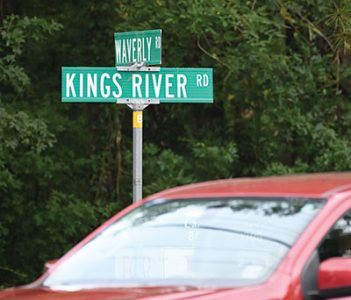 A change in zoning is needed for the project to build townhouses on a tract at the intersection.

A plan to build townhouses on the corner of one of the busiest intersections west of Highway 17 will save trees and reduce traffic impacts, according to the project’s designer.

It will also require a zoning change to increase the density from six units to 15.

“It’s going to be a tough sell because of the Litchfield tennis courts,” said Bruce Watts, who designed the project for a group of investors that have a contract to buy 3.3 acres at the corner of Waverly and Kings River roads from Calvin Gilmore, the country singer and founder of the Carolina Opry. Gilmore has a house across the intersection.

Plans to rezone the former Litchfield Racquet Club for residential development last year led to the formation of the citizens group Keep It Green, which has spoken out against multi-family development.

The Gilmore house is surrounded by live oaks and other trees. “That’s how we were able to get the property from him, by promising him it would look like his property,” Watts said. “We’re going  to leave every tree that’s not in a building footprint.”

Watts added that he is not a partner in the developer, but came up with the concept. He is a builder who created the commercial phase of Mingo in Willbrook and the Da Gullah Way mixed-use development off Highway 17.

The project known as Waverly at Kings calls for three Charleston-style buildings each with five townhouses. Parking is on the ground floor with two stories of living space above.

“We’re going to build a little village right in the middle of the property,” Watts said. “Calvin doesn’t want to see anything.”

The property is currently zoned “residential half-acre.” Gilmore has asked the county to rezone it as a “flexible design district” to allow the multi-family development. The number of units would be capped by deed restrictions as well as the zoning, Watts said.

In addition to his music business, Gilmore also has a real estate investment company. Its portfolio includes his home on 20 acres and the 3.3 acres up for rezoning. A master plan for the property completed in 2016 shows 11 duplexes on the smaller tract and 19 duplexes surrounding the house. The larger tract is currently zoned “forest and agriculture.”

“This was merely a private study,” Goggans said. The firm didn’t seek any approvals or permits.

The property is in his council district and he said he would like to have a vote in the matter. But Goggans said he would seek an opinion from the county attorney about whether he should recuse himself.

The intersection of Waverly and Kings River and its four-way stop is proposed for a roundabout in a study of traffic on Waccamaw Neck. If that is done, there will be enough space on the townhouse property to accommodate the right of way, Watts said. The closest building is about 200 feet from the intersection.

The multi-family project will have entrances from each road, but they will be located as far as possible from the intersection. Watts pointed out that single-family development could have up to six curb cuts.

But he said the biggest advantage from the rezoning is the ability to save trees.

“The thing about single-family that people don’t realize is you’re not restricted in cutting your trees down,” Watts said.

“It does, frankly, look pretty good as far as saving trees,” said Boyd Johnson, the county planning director. “Trees were an up-front conversation on that site.”

The traffic impact will be another consideration as the staff reviews the project, he said.

Like Watts, Johnson expects the main issue to be density. “We’re going to be looking closely at that,” Johnson said.

The Planning Commission will hold a public hearing on the rezoning request on Aug. 20.