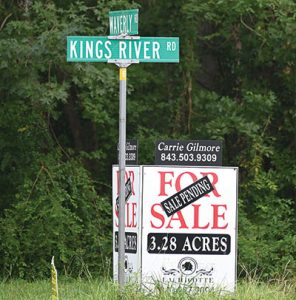 The site was initially proposed for 14 townhouse units.

A plan for townhouses at the intersection of Waverly and Kings River roads has been changed to duplexes in the face of criticism from area residents.

“I’ll say it to the community: I heard you,” Bruce Watts, who created the plan, said this week. He is due to submit a plan to the county today for 10 duplexes in five buildings. The buildings will be one and a half stories rather than the three stories proposed for the townhouses, he said.

The project, Waverly and Kings, initially called for 14 townhouses in three buildings on the 3.3-acre site. The property is owned by Calvin Gilmore, whose house is on the opposite corner of the intersection. He plans to sell it to a group of investors. A condition of the sale is that the trees on the property must be protected, Watts said.

The property is currently zoned “half-acre residential.” That would allow up to six single-family lots. The zoning change to a “flexible design district” would allow the units to be clustered in the middle of the property.

Opponents said the increase in the number of units will impact traffic at the busy intersection and runs counter to the goals of the county land-use plan by raising the density of residential development on the Waccamaw Neck.

The Planning Commission last month failed to make a recommendation to County Council on the zoning change, with members tied 3-3. The commission didn’t address a change in the future land-use plan that is required to change the zoning from low to medium density.

The council gave the first of three required readings to the zoning change this week. That was done by title only and without comment.

During the council’s public comment period, members of the citizens group Keep It Green said they would be back for the second reading to urge the council to deny the request. They were not aware that the plan was due to change.

“Under the law, the owner has no right to a zoning change,” Mary Beth Klein, a leader of Keep It Green, told the council. She added that the neighbors have a right to expect the council to maintain the existing single-family zoning.

Tommy Gordon, whose house is adjacent to the proposed development, told the council he was concerned that elements of the plan could change outside the public view. “It seems like a very open-ended rezoning,” he said.

One of those changes was the road that would have served the townhouses. It was pointed out at the Planning Commission meeting that the road would serve as a cut-through for drivers who want to avoid the four-way stop at Waverly and Kings River. Watts said at the time that he would consider a security gate.

This week, Watts said the revised plan will only have one access: on Waverly Road. It will be moved farther from the neighbors on Gordon’s street to increase the buffer.

In addition, Watts said he reduced the height of the buildings because of Gordon’s concern about three-story buildings looking down on the nearby houses.

“I reduced the density. There were concerns about roof height so I dropped the height,” he said. “We’re not touching any of those border trees.”

That means more trees will be saved in addition to the 83 that were saved under the original plan, although Watts didn’t have an exact number.

“I still clustered [the buildings] on the inside so I could maintain the natural look on the outside from Waverly and Kings River Road,” Watts said.

The changes aren’t enough to quell the concerns of Keep It Green.

“Everybody’s missing the point here,” Klein said after she learned of the changes. “We’re putting the cart way before the horse.”

She said the current land-use plan calls for no increase in residential density and even the reduced number of units at Waverly and Kings doesn’t meet that goal.

Going from six units to 10, “that’s still five families beyond what’s already in the plan,” Klein said. “At some point we have to draw the line.”

The rezoning request will come up for second reading Sept. 22. The council can approve it, deny it or remand it to the Planning Commission.

Before the zoning can be changed, the council has to change the future land-use plan for the property from low to medium density. That process has to be initiated by the Planning Commission.