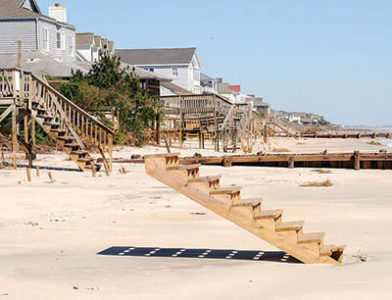 Stairs to a walkway were left behind on the beach at the south end after Hurricane Matthew in 2016.

Lawyers with the Army Corps of Engineers were scheduled to talk Wednesday with one of two property owners who declined to sign easements to allow a federally-funded beach renourishment project on the south end of Pawleys Island. The town will learn today whether the missing easements, two of the 113 required, will alter plans to start work in the fall.
“Hopefully it’s not going to hold up the project,” Administrator Ryan Fabbri said. The town set an April 30 deadline for acquiring the easements that provide for public use of the improved beach. “I don’t know what the magic number is, but anything over five would have killed the project.”
Town Council will have to decide whether to go to court to acquire easements through eminent domain to keep the project on track, he said.
The Corps’ timetable calls for certifying the easements by the end of May and putting the project out to bid in July. Along with placing up to 840,000 cubic yards of offshore sand on the island’s south end, the Corps will manage a town- and state-funded project to place sand on the beach as far north as Third Street.
Fabbri declined to name the owners who have yet to sign, saying he didn’t want to derail any last-minute negotiations. He spoke with one for about an hour on April 30. “It was a little heated at times, but we ended up on good terms,” he said. “He’s not comfortable with the way it reads and giving up the right to property so close to his house.”
Other owners have questioned whether the easements allow people to cross the property to reach the beach or use their decks that overhang the beach. Fabbri has told them they do not. The area covered by the easement “is already the public beach,” he said.
Some owners asked to change the language of the easements. The Corps told the town that is not an option. “We have a lot of lawyers who are property owners,” Fabbri said. One of those who told neighbors that he didn’t plan to sign actually did, Fabbri added.
If last-ditch talks fail to produce the last two easements “we’ll move on to the next phase, which is condemnation,” Fabbri said.
“It’s not the way I wanted it or the council wanted it to go.”
The town would file notice with the Circuit Court along with a payment for the value of the easement. That would allow work to start and any dispute over the value would be dealt with later.
“At the end of the day, it’s a good thing. The island’s in desperate need,” Fabbri said.