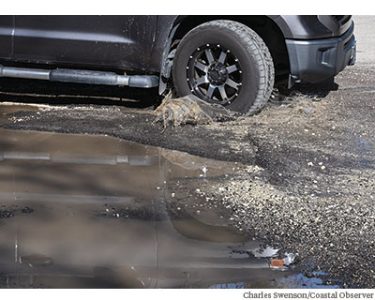 The intersection of Grate Avenue and Petigru Drive in currently under repair.

It costs Georgetown County $66,000 a year to have the state write about 20 checks for road paving projects and send out monthly financial data. The data comes late.
“The CTC is working off February statements. You just got March. Here we are in May,” Herb Cooper, a transportation consultant, told the County Transportation Committee this week, its first meeting since January 2020.
The committee is responsible for allocating the county’s share of revenue from the state gas tax, estimated at just over $2 million this year. It wants to get more mileage from the money it spends to improve and resurface about 1,100 miles of roads.
The committee agreed this week to hire Cooper to set up a system that will allow Georgetown County to administer its own CTC funds rather than pay the state Department of Transportation 3 percent annually to do the work.
“CTC is a program that’s managed by DOT, but not a priority for DOT,” Cooper said. He was the administrator of the program from 2007 until he retired from the department in 2018.
Committee member Glen Insley had already talked with the county finance department about the concept, which is used in 25 of the 46 counties. “They thought they could handle it,” he said.
The committee will pay Cooper’s firm, County Transportation Consulting, $35,000 through the end of March 2022 to set up and monitor a locally-administered CTC program. The savings will be immediate since DOT deducts its management fee at the start of the new fiscal year in July.
Cooper told the committee that “$66,000 doesn’t sound like a lot, but if you had that money since the start of the program in the ’90s, that’s a lot of money.”
The revenue, known as “C funds,” now go into an account in the state Treasurer’s Office. There was $5.9 million in the account at the end of March. All but $674,000 is committed to road projects.
The county is required to spend at least 27.3 percent of its revenue on state roads. For the money spent on county roads, the contractors are paid by the county, which is then reimbursed by the state. By keeping the money in the county Treasurer’s Office, the reimbursements can be made faster, Cooper said.
His contract with the local transportation committee also includes changing the way projects are put out to bid.
“Your prices would be much lower to get your road paved than if you just let your own contract,” Cooper said.
Rather than seek bids on small stand-alone projects, Georgetown County projects will be included in DOT’s larger Market Area Contracts. Those contracts are put out to bid less often, Cooper said, because DOT realized with more frequent solicitations contractors would submit higher prices. If they didn’t win a contract, they knew another opportunity would come along soon.
With the Market Area Contracts, “they’re going to lower their prices to get those contracts or they’re going to go out of business,” Cooper said.
In his time as the CTC program manager, he said he saw the price of asphalt could be as much as 25 percent higher on small contracts.
Ray Funnye, the county’s director of Public Services, and Timmy Britt, DOT’s resident maintenance engineer, said they favor the proposed changes.