Tree rules may extend into state right of way 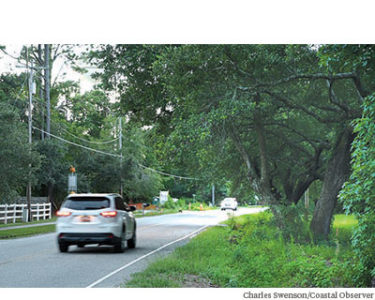 If the trees were on private property, 14 of 17 would be protected under the county ordinance.

“We can do that, legally. We did not do that,” Boyd Johnson, the county planning director, said.

The Porches at Waverly, a 13-lot subdivision, needs to connect with a Georgetown County Water and Sewer District lift station about 400 feet down the road. A 10-inch gravity sewer line was installed by boring under the trees along the road right of way. The tree roots caused dips in the pipe and Georgetown County Water and Sewer District won’t accept it into its system.

Digging up the pipe and replacing it will kill 17 trees along the road. “Fourteen would be protected if they were on private property,” Johnson said.

“Everybody that I have talked to is interested in finding a way of stopping the cutting of the trees,” Goldfinch said.

The encroachment permit was stayed to allow further discussion.

A trackhoe parked under the trees last week was removed on Friday. David Quandt, contractor for the project, said it will return if an alternative can’t be found. “We’re coming back down there,” he said Wednesday. “They’ve got permits to tear the trees down.”

Goldfinch said DOT could revoke the encroachment permit for various reasons, including the likelihood of future road work. “We don’t want to prevent these people from finalizing their development, but we didn’t want the trees cut down,” he said.

DOT also told him that it defers to county ordinances in granting permits.

“We’ve never done that in the history of Georgetown County,” Johnson said of applying the tree ordinance to the right of way.

Johnson looked at each of the trees last week. The largest is an oak with a 41-inch diameter, he said.

County Council Member Steve Goggans supports changing the tree ordinance, though he noted that wouldn’t be done in time to affect the Porches at Pawleys. “Just like we mitigate for wetlands, there ought to be some consideration for trees,” he said.

The ordinance can be crafted to protect significant trees without impeding road projects, Goggans said.

In the meantime, “the owners said they’ve exhausted all measures,” Quandt said. “They have gone above and beyond.”

Ray Gagnon, executive director of the water and sewer district, said he hasn’t heard from the developers, Chase and Browder McGill, or their representatives since last week. “They have not suggested any remedy or alternative,” he said.

Quandt hopes public pressure on the utility will change that decision.

“We’re looking at all the angles. I hope we’ll find a resolution before the trees get cut,” Goldfinch said. “We’re waiting for answers.”