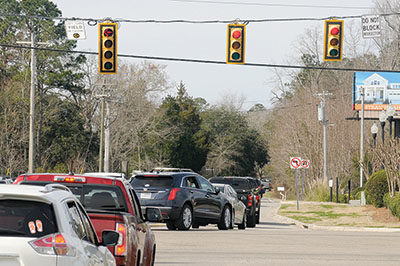 Cars waiting to turn onto Tournament Boulevard from Bypass 17 often block traffic on the highway.

The backups on Bypass 17 caused by traffic trying to turn onto Tournament Boulevard have reached Pawleys Island, at least by word of mouth. “I have people tell me all the time how bad it is,” Pawleys Island Mayor Jimmy Braswell said.

He joined the chorus of officials who pressed the state Department of Transportation last week to explain why it will take another four years to solve a problem they have already wrestled with for more than two years.

Tournament Boulevard runs from the Prince Creek community that sits astride the Georgetown-Horry county line to Bypass 17. Traffic turning off the bypass has to go through a four-way stop where Tournament Boulevard meets McDowell Shortcut. The intersection is less than two-tenths of a mile from the bypass and at peak times traffic backups block the bypass, “which is a real misnomer,” Braswell said.

State Rep. Russell Fry agreed. “The idea of a bypass is laughable,” he said last week at a meeting of the Grand Strand Area Transportation Study’s policy committee. The collection of state and local officials allocates funds for regional road projects.

In 2016, the committee added the intersection to its long-range transportation improvement plan. But it was initially considered a road-widening project. Funds for that wouldn’t be available for 10 to 15 years, the committee was told.

It moved forward as an intersection improvement. But the first cost estimate was $11.3 million, more than the budget for improvements throughout the region in 2016.

Now the budget for Tournament and McDowell is just over $2.6 million, but it is scheduled for construction in 2023.

DOT will seek bids this year for $250,000 in studies and preliminary engineering, Stacey Johnson, a DOT project manager, said. That will be followed by right-of-way acquisition.

The agency allows a “gap year” for right of way, Johnson said. Once secured, the final design is completed.

“So if all this money was available, we couldn’t move forward,” Fry said. “Anything that could accelerate this?”

Mark Hoeweler, the GSATS executive director, said there have been issues in the past with right of way at the site. It took a court order to allow DOT access to one parcel for maintenance.

Johnson added that there should  be a completed design by 2021.

“That’s unacceptable,” state Sen. Stephen Goldfinch, who chairs the policy committee, said. “Why does it take two years to engineer a teeny intersection?”

Hoeweler said there was talk of adjusting the traffic signal at Bypass 17 and Tournament Boulevard to try to prevent cross traffic blocking the bypass. “Nothing was ever done,” he said. One problem was that the turning lane for northbound traffic on the highway isn’t long enough to hold all the traffic waiting to turn.

Fry suggested removing the four-way stop at McDowell and let the traffic flow on Tournament Boulevard. “I don’t know if it would help temporarily. It may be a disaster,” he said. But if something isn’t done, growth in the area will make the problem worse.

Braswell agreed there are alternatives for the cross traffic. “It’s called shortcut for a reason,” he said.

DOT officials said in 2016 that the widening of Highway 707 would relieve congestion on Tournament Boulevard. That hasn’t happened.

“We can put a man on the moon, but an intersection the size of this room DOT can’t design,” Goldfinch said.

Perhaps DOT can put the project on the fast track, Johnson said.