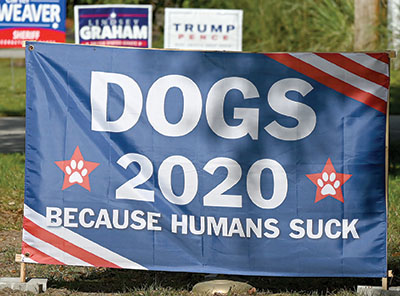 A sign in Litchfield Country Club shows election fatigue has set in.

By a show of hands, most of the 70 people spread out over the courts in the Waccamaw Regional Recreation Center had already voted. That made last week’s GOP stump meeting more like a homecoming in a socially-distanced election cycle. But the candidates came with a message. “Get your neighbors to vote,” state Sen. Stephen Goldfinch said.

Voters got the message. Georgetown County saw 77.9 percent of its 47,414 registered voters cast ballots in Tuesday’s election. And of the 36,940 votes cast, over half came from either mail-in or in-person absentee ballots, according to the county Board of Voter Registration and Elections.

The result was that long lines on election day had mostly dissipated by mid-morning at the nine precincts on the Waccamaw Neck.

John Scrantom arrived at the Waccamaw Regional Recreation Center at 5:30 a.m., ahead of the poll workers. “This is the only way to vote,” he said. He was also first in line at the Pawleys Island 2 precinct, the county’s largest, in 2016. Turnout that year was 75 percent in the county.

The coronavirus pandemic prompted the state legislature to change the rules on absentee voting to include “state of emergency” as one of the qualifications for receiving a ballot.

Billy Cheezem of Murrells Inlet would have voted in-person absentee if it hadn’t required a trip to the elections office in Georgetown. Instead, when he saw fewer than 30 people in line Tuesday at Belin Methodist Church, he phoned his wife, Anita. “I said, ‘come on,’” and the couple voted in about 15 minutes.

About 300 people were outside the church when the polls opened, said Mary Lou Gies, the poll manager for Murrells Inlet 2.

At Pawleys Island 5, most of the seven voting machines set out at each end of the Waccamaw High gym sat idle by 11 a.m. “Oh my God,” said Greg DuMont as he left the poll. “Every time I came here I’ve had a line out to the parking lot.”

Just over 60 percent of the voters in the precinct cast absentee ballots.

Goldfinch, a Murrells Inlet Republican, won a second term in Senate District 34, easily fending off a challenge from Emily Cegledy, a Democrat from Litchfield and a first-time candidate. Goldfinch received 69.2 percent of the vote in the district, which stretches from Myrtle Beach to Mount Pleasant.

“I haven’t said one thing about my campaign, right?” he told the audience at the rally. “I don’t talk much about my campaign. I talk more about Lindsey Graham’s and President Trump’s because we have got to drag them across the line.”

Trump won 55.9 percent of the vote in Georgetown County even as the outcome of the race remained uncertain in the rest of the country. That was 1 point better than his win over Hillary Clinton in 2016.

Graham won a fourth term over Jaime Harrison, the Democratic Party nominee, with 55.6 percent of the vote overall, about the same share he received in Georgetown County.

Graham made a stop at Pawleys Island on Saturday as part of a bus tour around the state.

“Georgetown used to be the place we hoped we could make it close. Now, it’s the place we know we’re going to win,” Graham said.

The race was notable for the $100 million raised by Harrison’s campaign.

“Most of it came from out of state, like all of it,” Graham said.

It was a measure of how much he is hated for his support of Trump and the president’s Supreme Court nominees, Graham said.

But he was also the target of conservatives in South Carolina six years ago for his willingness to work with the Obama administration. He gave the Democrats credit for the swing in his fortunes.

“I want to thank my opponent for uniting every conservative. I’ve got people supporting me now that six months ago wouldn’t have called the fire department if I had been on fire,” he said. “I’ve tried to be a good conservative, but also find ways to solve problems.”

“The person that’s running against me, I forgot her name. She grew up in this district,” Rice said. But he went on to say that Watson moved to Charleston, where she works as a teacher. “So a vote for her is a vote for Charleston to have two congressmen and the Grand Strand and Pee Dee to have none. Who thinks that’s a good idea?”

Graham’s rally also drew heavily from people who said they had already cast their votes.

“If you don’t have a friend, make one,” and get them to vote, Graham said. “Turnout is the key. If people turn out and vote who are center-right, middle of the road in South Carolina, I win big.”

Debbie Smith, who chairs the county Democratic Party, was amazed by the turnout, but disappointed in the results.

“We’re disappointed because we did everything we could to get the vote out and we succeeded,” Smith said Wednesday. “I had hoped that South Carolina, and Georgetown County in particular, had been moving a little toward the purple because that’s been a trend in recent years. It appears that has halted or been reversed.”

The only local race the GOP lost was in state Senate District 32, where David Ellison, a retired Air Force officer, failed to unseat the incumbent Democrat Ronnie Sabb.

Karol Anderson, who chairs the local GOP, said it was a good showing for a first-time candidate.

“I’m really pleased with what Georgetown has done,” Anderson said. “I’m pleased with the Republicans that got elected or re-elected.”

The Board of Voter Registration and Elections meets Friday at 10 a.m. to certify the results.

The unofficial vote count in Georgetown County for the contested races is: