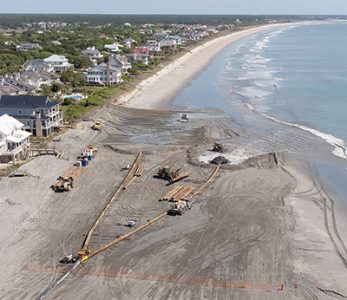 Offshore sand flows onto the beach at DeBordieu.

The first wave of summer visitors is expected to arrive on the beach in the next few weeks. When they do, volunteers wearing hard hats, reflective vests and closed-toed shoes will be there to greet them.

A renourishment project at DeBordieu has added about 300 feet to the dry sand beach in front of a sea wall on the southern end of the community. The work is about halfway toward its goal of placing 650,000 cubic yards of offshore sand on the beach and will run into sea turtle nesting season.

The contractor, Marinex Construction, is working with S.C. United Turtle Enthusiasts to create a monitoring plan to make sure no turtles are affected by the project. The monitoring is a condition of the state and federal permits issued for the work, which includes construction of three groins perpendicular to the beach that will help hold the new sand in place.

Sea turtle nesting season starts May 1, but the loggerhead sea turtles that make up the majority of the local nests don’t begin to arrive until the ocean water temperature is around 75 degrees. It is currently in the upper 60s, said Betsy Brabson, who leads the SCUTE monitoring at DeBordieu, Hobcaw and North Island.

“We don’t mobilize when the state gets its first nest,” she said. “We would wait until DNR lets us know there is nesting at Cape Romain or South Island.”

The monitors operate under permits from the state Department of Natural Resources.

Eight SCUTE volunteers are ready to monitor the renourishment project area once nesting begins. They will take shifts from 6 p.m. to midnight and midnight to 6 a.m.

They will watch for turtles that crawl ashore in the work area to lay eggs and then make sure that any nests that are laid are moved outside the project area.

Tyler Stubbs, the project manager for Marinex, said the company is used to working in nesting areas on the Atlantic and Gulf coasts.

“They may look, but they don’t come into the work site,” he said.

The work lights and noise of heavy equipment is “everything they don’t want,” Brabson said.

But if the volunteers see a turtle that could be harmed, they will have the authority to stop the work.

“We don’t take it lightly to shut the dredge down, but you all are empowered to if a turtle does crawl into the work site,” Stubbs told the volunteers at a training session this week.

Part of that training included lessons in VHF radio operation, which volunteers will use to let the crew know they are on site.

They will also be equipped with hard hats and safety vests.

The groin construction will lag behind the sand pumping, but that work will only occur at night if the tide conditions warrant it. Volunteers will see any nesting activity in their daily morning beach walks.

The renourishment will create a dune where nesting had been blocked by the seawall.

Whether the turtles will take advantage of it is uncertain. “Turtles keep us guessing,” she added.