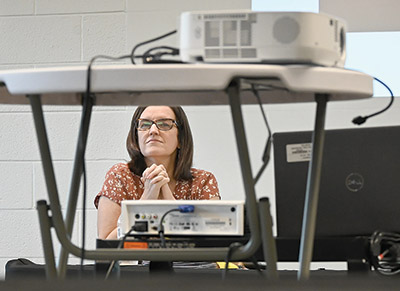 Holly Richardson, the county planning director, said the survey questions are designed to be neutral.

Work to update Georgetown County’s land-use plan will resume with a community survey to help establish the direction and form of future growth. The Planning Commission agreed this week to a set of survey questions that will revive a process halted nearly a year ago after complaints that there wasn’t enough public involvement.

“The main purpose of the survey is to gather input from the respondents about their values,” said Holly Richardson, the county planning director.

But along with the 20 questions on the survey, commission members continue to question the function of the land-use plan, one of 10 elements of the county’s comprehensive plan, a document required by state law.

“Is there any way to ensure that that land-use element is enforceable and followed?” commission member Marla Hamby asked at a workshop this week.

“It’s not intended to be necessarily enforceable,” said Carol Coleman, the planning director for Waccamaw Regional Council of Governments, which is helping the county create the plan. She has also worked as the county’s planning director.

The future land-use maps contained in the land-use element are the basis for the zoning ordinance, which is enforceable. Hamby has said that it’s a source of frustration that those maps are changed when property is rezoned.

On the Waccamaw Neck, “we’re beyond mad. We’re furious,” she said.

Jay Watson, who started work last month as the county attorney, said all the comprehensive plan elements are meant to be reviewed and updated as  necessary, even though a 10-year revision is mandatory. “That’s in the code. That’s anticipated,” he said. “I think a lot of this is going to be data-driven, and that’s what you’re in the process of doing now.”

Commission member Sandra Bundy said she is concerned data will be left out because the land-use element isn’t tied to the other elements, which include, population, housing, natural resources, cultural resources, economic development, transportation and resiliency.

“These plans don’t talk to each other,” Bundy said.

While it’s important to make sure that the elements are in agreement and cross-reference information, Coleman said they are intended to stand on their own.

The land-use element was last overhauled in 2007. The current update began in 2018 and was delayed while the county commissioned two studies of the Highway 17 corridor on Waccamaw Neck. The pandemic caused further delays and in November 2020 the county agreed to pause work following a community forum where residents said their input was being ignored.

This summer, the citizens groups Keep It Green and Preserve Murrells Inlet threatened to go to court if the county didn’t do more to complete the comprehensive plan updates.

This week, the groups presented the commission with a list of questions for the community.  It was developed with the help of a Coastal Carolina University professor, said Gary Weinreich, a member of Preserve Murrells Inlet.

“We asked questions that went to the root of the known issues,” he said.

Hamby, a member of Keep It Green, brought copies for the other commission members. Elizabeth Krauss, who chairs the commission,  said they could review the proposal individually, but it would be up to staff to decide whether to include any portions in the community survey.

“My concern is that it’s getting too long,” Krauss said.

“I’m trying to keep it at 20 questions,” Richardson said. Those are in addition to getting demographic information about those who complete the survey.

After the draft survey was reviewed by the commission, Richardson tweaked some of the language. There are options  for “none of the above” when the survey asks about options for future development as well as a place to write in choices under “other.”

The final question asks people to provide their vision of what Georgetown County should look like in the next 10 or 20 years.

“That’s sort of the big one,” Richardson said.

County Council Member Steve Goggans sat in on the workshop. Before he was elected to the council in 2014, he served on one of the citizen committees that developed goals for the land-use element during the 2007 update.

“There’s been a lot of public input already about the direction this part of the county should go,” Goggans said. “I am leery about interest groups grabbing hold of it and steering it and pursuing their agenda.”

He recalled that the committee he served on in 2007 was made up mostly of retired people and was mostly white.

“I thought it was a very poor process,” Goggans said.

The goal is to complete the survey process before the end of November.