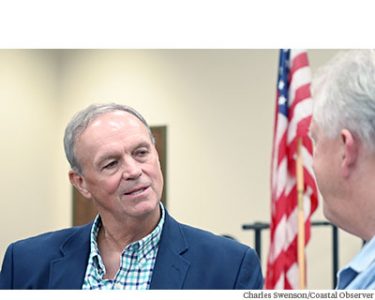 Sel Hemingway will retire at the end of the year after 11 years as administrator.

Two county officials are in the running for Georgetown County administrator. Ray Funnye, the Public Services director, and Brian Tucker, director of Economic Development, were among nearly 40 applicants.

A new administrator should be under contract by the end of October as Georgetown County Council narrows the field of applicants to replace Sel Hemingway. The council will interview five candidates.

Hemingway announced in May that he would retire at the end of the year. He was hired in 2008 after serving 11 years on County Council.

The council met this week in a closed session to rank the applicants. The seven members were asked for their top five choices and those were assigned a value, with 5 points for their first choice.

“We were hoping the numbers would bunch up so the front-runner would stand out,” Council Chairman John Thomas said. That didn’t happen, he said.

But five were invited for interviews.

Funnye said he received a call inviting him for an interview. He has worked for the county 27 years. “I love Georgetown County,” he said. The administrator’s job is an opportunity to help it grow, he said.

Tucker also confirmed that he had been asked to interview for the job. He became development director in 2013 after a year as CEO of the Chamber of Commerce. Before that he was a chamber director and banker in North Augusta.

Thomas said he could “neither confirm nor deny” who was on the list of applicants or those who will be invited for interviews. He did say the majority of the 38 applicants were from South Carolina, but that they came from as far as the Midwest.

“We got a lot of people who were qualified,” Thomas said.

The council is tentatively scheduled to interview applicants on Oct. 9. It plans to invite three back to meet the public on Oct. 16 and vote on the finalist on Oct. 22.

By law, the county has to announce the names of at least three finalists. Wesley Bryant, the county attorney, said those will be announced after the interviews.

Members of the local chapter of the NAACP told council at a meeting this week they are looking for transparency in the process, as well as an administrator from outside the county.

Update: This article was changed from the print version after Funnye and Tucker confirmed they had been asked to interview for the administrator’s job. It was also corrected to reflect that Hemingway became administrator in 2008, not 2011.