Unlikely author delves into the history of Sunset Lodge 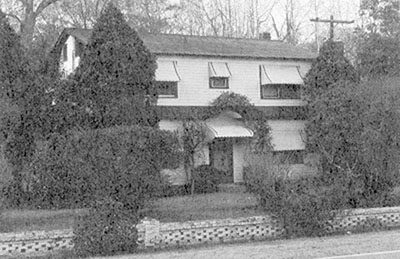 The Sunset Lodge outside Georgetown closed in 1969, but people still talk about it.

December will mark the 50th anniversary of the closing of Sunset Lodge, a brothel that operated outside Georgetown near what is now a county industrial park. Over 33 years it gained world-wide renown for a port city that projected a glow of Southern gentility from beneath the live oaks that shaded its quiet streets.

The paradox is at the heart of “Sunset Lodge in Georgetown: The Story of a Madam,” which will be published next week by the History Press. The author, David Hodges, has put into print a story that has been talked about – sometimes only whispered about – in Georgetown County for generations. Beyond pulling together individual recollections that have only become more precious with the passage of time, he has given valuable perspective to the peculiar institution that was the Sunset Lodge.

Hodges, an insurance agent and rare book collector in Columbia, seems an unlikely author for such a history. “I have been asked many times what interested me in this subject, which is a back-handed way of asking why a conservative man, married 43 years with four children and  nine grandchildren, who is an elder at his conservative Presbyterian church, would do such a thing,” he writes.

The answer is: what started out as a talk for a club 14 years ago turned into a storytelling project then a book. Hodges dug into public records to trace the life of Hazel Weisse from her birth in a small town in southern Indiana to Chicago to a brothel she opened in Florence in 1928. When a new mayor cracked down on the brothels in that thriving railroad town, Weisse bought the house outside Georgetown with a $2,700 loan from Tom Yawkey.

Yawkey inherited a fortune when he was still a teenager. Another inheritance included a hunt club on South Island that is now a wildlife refuge and enough money to allow him to buy the Boston Red Sox at age 30. Hodges surmises that the connection between Yawkey and Weisse was the brothel in Florence. She set up shop just months before International Paper announced plans to build a mill in Georgetown.

Hodges discounts stories that Weisse was recruited to provide a distraction for construction crews building the mill. Nevertheless, Yawkey told an employee that Weisse repaid her loan quickly. The tie to one of America’s wealthiest men accounts for the ability of Sunset Lodge to flout the law while other brothels were closed down, but Hodges also credits Weisse’s business acumen for her longevity.

Prostitution was a cash business, Hodge notes, and Georgetown in the depths of the Great Depression was cash-poor. He cites census data that put the income from Weisse’s “boardinghouse” at $3,033 in 1940. That’s the equivalent of over $55,000 today. Hodges also points out that was only the revenue she declared.

Sunset Lodge was a boon to the local economy from the bank where Weisse and her “sporting ladies” deposited their money to the shops on Front Street where they spent it to the cab drivers who took their customers to the brothel so that the men’s cars wouldn’t be seen. Weisse was also a generous donor to the local charities and to state legislators whom she hosted for a week each spring.

“Sunset Lodge” provides what Hodges calls a mosaic of the brothel that he distilled from years collecting stories. Every time he gave a talk on the subject, people would come forward with stories. Some were first-hand accounts, others had been passed along with changing details. Hodges breaks these into vignettes of narrative nonfiction.

In trying to separate fact from fiction, he discovered that some memories of Sunset Lodge were rooted in the novel “Keeper of the House” by Becky Godwin. It was published in 1994 and tells the story of “Hazelhedge” through the eyes of a black maid. Goodwin, a former Pawleys Island resident, drew on local sources, but used it as a background for a compelling story of social change.

Yet the novel may remain the best, even if imaginary, look inside the brothel. The gap in Hodges’ book, which he admits up front, is that he was never able to contact any of the women who worked at Sunset Lodge. He made two attempts. He met only silence.

Weisse died in 1974 at age 74. She gave birth to a son at 19 out of wedlock. While Hodges was able to trace her family, he doesn’t name names. In fact, there are few names used in the book. Some of his sources were adamant that they didn’t want their names used, he said in an interview. Others, particularly those who were older, offered no objections.

He opted for discretion. “It would have been quicksand,” Hodges said.

Hodges acknowledges there are moral questions that need to be raised in any discussion of prostitution. But in many of the stories he recounts those are obscured by a wry humor.

“One story everyone knew: the hearse,” he said.

In one form or another, it involves a suspicious wife who staked out the Sunset Lodge one night after her husband had gone out. She didn’t see her husband leave, but she did see a body carried out on a stretcher and placed in a hearse.

Her husband was home when she returned.

Hodges will speak at the Moveable Feast luncheon on Sept. 6. at DeBordieu. The event is full, but call 843-235-9600 to get on the waiting list. He will sign copies that day at 2 p.m. at Litchfield Books.

A book signing is also scheduled for Sept. 19 from 5 to 8 p.m. at the Harbor Shop on Front Street.