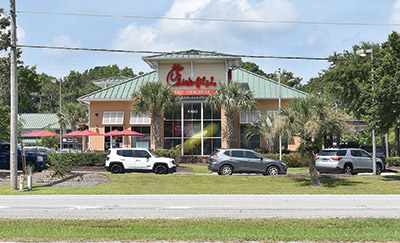 The restaurant will add a canopy and menu board at the front of the building.

Workers at Chick-fil-A in Murrells Inlet will have a dry place to take orders even though it means encroaching on the setback along Highway 17 that has been a source of concern for area residents in recent years.

The fast-food restaurant received a variance from the Georgetown County Board of Zoning appeals that will allow a canopy within 18 feet of Bypass 17. The property is part of the Woodside Village “planned development” where the setback is 50 feet. Since the development was approved, the county has affirmed that it wants a 90-foot setback to apply along the highway.

While the coronavirus pandemic forced many restaurants to curtail indoor seating over the last 18 months, that only accelerated a trend that Chick-fil-A has seen coming for a while, said Sean Hickman, a civil engineer for a Florida firm, Interplan, that provides planning services to the company.

“It’s part of the transformation from dine-in to drive-thru that most fast foods have been going through in the last few years,” Hickman told the appeals board. “That’s the main reason for this upgrade. They’re not inside the building taking orders.”

The four of the seven commission members who attended last week’s hearing were familiar with the issues.

“I recognize the traffic issue there,” said Chris Olds, who chairs the commission.

It’s important to Chick-fil-A that customers have interaction with the people who take the orders outside the building, Hickman said.

“They have iPads and they stand at your door,” he explained to the board. “If it’s raining and snowing, they’ll have no cover.”

Hickman pointed out that the Coastal Car Wash on Highway 17 at Pawleys Island has a canopy over its vacuum cleaner station that falls within the highway setback.

“How did that happen?” board member Cindy Person asked.

The setback doesn’t apply to canopies for gas stations, and car washes fall into that category, said Holly Richardson, the county planning director.

“As much as I love Chick-fil-A, and I do, I’m not seeing how this meets the four criteria,” Person said.

State law allows a variance to a zoning regulation if the appeals board finds:

• there are extraordinary conditions that apply to the property;

• the conditions don’t apply to other property in the vicinity;

• the conditions mean that applying the regulation would unreasonably restrict the use of the property;

• and granting the variance would not be a detriment to the public good.

The board thought the planned development zoning would cover the extraordinary conditions. It was less certain how enforcing the setback would restrict the use of a property where the driveway is filled to overflowing with cars of people waiting to get food.

Olds noted that there is a playground in the front of the building. He asked if removing that would allow the proposed canopy to move farther back from the highway.

“It doesn’t meet the four criteria,” he told Hickman. “For at least three criteria, we can find a linkage.”

Chick-fil-A has removed playgrounds in other restaurants, Hickman said, but he wasn’t sure that would create enough room to build outside the highway setback.

“That’s a big ask. There are a lot of people I have to talk to,” he added.

Board member Will Moody suggested a cloth awning rather than a metal canopy might be a middle road. “This seems a little more permanent than a pop-up beach tent,” he said.

Any permanent structure would need to meet the setback requirement, unless the board approved a variance, Richardson said.
It’s sort of a fine line between what’s permanent and what’s not,” she said.

The proposed canopy would be more attractive than the tent that’s being used now, Olds said.

He moved to grant the variance based on the limited access to the site and the impact on traffic that “unreasonably limits the ability of the public to go to the restaurant.”

Moody and board member Harry Coker agreed. Person was opposed.