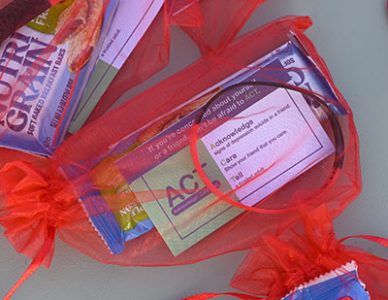 A program at Waccamaw High encourages students to talk about mental health issues.

Teresa Robinette and Lynn Martin have a bond that no parent wants.

“I never had an idea that he would do that,” Robinette said of Jesse, who was 16 when he killed himself in May of 2019. “There had to be mental illness there. There had to be something there that triggered it at that moment to do that.”

Martin’s son, Caleb Coggeshall, was also 16 when he killed himself in August of 2008.

The first thing Martin thinks about when she wakes up and the last thing she thinks about before she goes to sleep is that Caleb is dead.

“It never goes away. It’s always there,” Martin said. “You just learn to live with it.”

Both boys final message to their mom was “I love you.”

Martin, a teacher who lives in Murrells Inlet, understands how difficult middle school and high school can be for teenagers. She recently spoke about her experience with the LC3 Youth Group.

“You’ve got to remember that it’s a short time in your life, and you will get past it,” Martin said. “The thing you need to do to get past it is share it.”

Robinette, who lives in Pawleys Island, works with the youth at St. Peter’s Lutheran Church. The staff there are developing programs to bring parents and teenagers together to talk about difficult subjects like suicide, sex and drugs.

The nonprofit hosted a 12-hour mental health awareness walk on May 1 at Waccamaw High School, where Jesse was a student.

“Mental health is not as hush-hush as it used to be, but it’s not where it should be,” Martin said. “If more people talked about it there would be less suicide.”

Waccamaw High started a “Signs of Suicide” program this year to promote open conversations about suicide. It has now expanded to all Georgetown County high schools and middle schools.

“I think it’s a great program,” Robinette said. “These kids have to be able to say, ‘hey, you know what? I feel like crap today. I’m having a bad day. I need someone to talk to.’”

Martin said Caleb, who was a rising junior at St. James High School, never talked about being unhappy or suicidal.

She encourages parents to take it seriously if a child expresses those feelings.

“Maybe it is for attention, but maybe they need that attention and they need for you to listen,” Martin said. “Listen to your children and ask questions and make sure they know that their feelings are acceptable, whatever they are. And that, as a parent, you will get them any kind of help that they need.”

As the 13th anniversary of Caleb’s death approaches, Martin said it hasn’t gotten easier because she continues to see Caleb’s friends celebrate milestones.

“I’m reminded that I’ll never see him as a father, as a husband,” she said. “I know he would have been amazing at both of those.”

Martin wants teenagers to know that the pain they’re feeling when they commit suicide doesn’t go away. It’s just carried by the survivors.

“It spreads forever, and it’s also a pain that never ends for families,” she added.

This week marked the second anniversary of Jesse’s death.