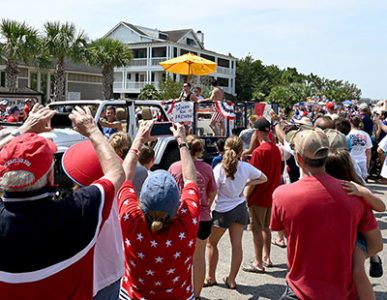 The town of Pawleys Island this week canceled its Fourth of July Parade, a tradition for 54 years, due to the rise of COVID-19 cases in the area. Organizers of the Murrells Inlet Boat Parade called off their event last week.

“It was not an easy decision,” Mayor Brian Henry said. “My preference would have been to have the parade and not spoil a long-standing tradition.”

But he said the growing number of cases and hospitalizations tipped the balance.

“After talking with everybody from the governor on down, I don’t see – with the spike we’ve got going on now – how we can do it,” Lee Hewitt, a founder and co-chairman of the Murrells Inlet Boat Parade committee said. He is also a member of the state House and served on the task force that set guidelines for reopening the state last month.

“There’s been no guidance from the governor’s office on festivals and events,” Hewitt added.

The boat parade is in its 37th year. It has never been canceled before, although it was held on July 2 one year because there was no high tide in the creek during the day on July 4.

The town of Pawleys Island sponsors the Fourth of July parade, recruiting judges and providing trophies to the top floats. It also requires floats to pay a registration fee and sells T-shirts. The mayor gets to pick the grand marshal.

The Town Council agreed last month to move forward with the parade, although it didn’t take a formal vote.

Two weeks ago, the consensus was still in favor of holding the parade, although Council Member Ashley Carter said he had been hearing growing concerns.

People line the streets to watch the floats, which include trailered boats, utility trailers and the occasional flat-bed truck decorated in patriotic themes.

“The people that talked with me were concerned about the proximity of people watching the parade,” Carter said. “With it being sponsored by the town itself, we had an issue with someone coming down with the virus. They may take legal action.”

He went to Administrator Ryan Fabbri on Monday and they spoke with Henry by phone.

With the cancellation of the Murrells Inlet parade and a golf cart parade at DeBordieu, Carter said they agreed that the Pawleys Island parade would be likely to attract even larger crowds.

“We didn’t want to endorse having people congregate,” Henry said. “It was the safest thing to do.”

He spoke with the other council members and said they endorsed the idea.

Fabbri said canceling the parade was an executive decision that didn’t require the council to vote. The group that judges the parade had already told the town they didn’t plan to come this year, he added.

The fate of the Murrells Inlet Boat Parade has been in doubt since the state began shutting down in March in an effort to slow the spread of the coronavirus. It didn’t help that the only tide favorable to the boat parade was in the late afternoon, raising additional concern about thunderstorms.

“If I could have the parade in front of the houses, I’d be fine,” Hewitt said. “My concern is the public viewing areas.”

Spectators pack the Marshwalk, Veterans Pier, Jetty View and the seawall at Belin Methodist Church to watch the passing boats.

“It’s the prudent thing to do, as much as I hate it,” Hewitt said.

The restaurants along the Marshwalk, which has been a focus of concern about crowds, also canceled their July Fourth fireworks show. It is now planned for Labor Day.

Hewitt hopes people will still decorate their boats if they are on the inlet July 4. The parade’s theme was to have been “Independence Day the Inlet Way.”

Pawleys Island has also canceled its kayak races, held in Pawleys Creek from the North Causeway bridge in July. The date and time are based on the tide.

“If we’re not going to have the parade, it makes no sense to have the kayak race,” Fabbri said. “I called Sam Harrelson personally.”

Harrelson, an island resident, has finished at the front of the pack every year, but one. “He’s the reigning champion for one more year,” Fabbri said.