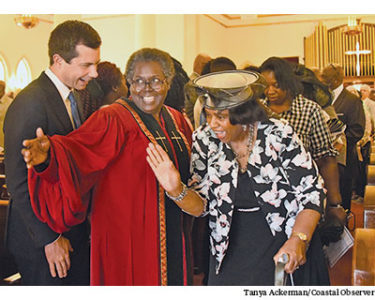 In the last few months, four people who want to be the Democratic Party nominee for president in 2020 made campaign stops in Georgetown County, looking for votes in one of the reddest parts of a red state.

Deb Smith, chairman of the county Democrats, said volunteers and activists have been working hard to get all the candidates to visit the county.

“I want us to be able to make an informed choice,” Smith said. “I want all our people to hear what the choices are.”

Sen. Bernie Sanders of Vermont is due to visit Friday. He will hold a breakfast and town hall meeting at the Beck Recreation Center in Georgetown. Doors open at 8:30 a.m.

Sanders lost the 2016 Democratic Party primary to Hillary Clinton by a wide margin. In Georgetown County, 77 percent of the vote went to Clinton. Sanders did better on the Waccamaw Neck, where he got a third of the vote.

Pete Buttigieg, the mayor of South Bend, Ind., attended Sunday services last week at Bethel AME  Church in Georgetown. Although Buttigieg’s campaign downplayed the event and didn’t even list it on his website, more than a dozen people were waiting outside while the service was taking place hoping to see the 37-year-old mayor and hear what he had to say during a meet-and-greet.

After the service, Buttigieg and the Rev. Dr. Betty Deas Clark, Bethel’s pastor, shook hands with the parishioners as they filed out of the church. Many stopped for a hug or a photo with “Mayor Pete,” the best known of the Democratic candidates to visit the county.

Buttigieg kicked off the meet-and-greet by saying that he is worried about the trajectory of the country and feels like time is running out to do something about things like the violence that is “ravaging” the country, the climate and racial injustice.

“We cannot continue repeating the same conversations and the same ’never agains’ that we utter every year, and have been for as long as I’ve been alive,” Buttigieg said. “We have got to do something different.”

In response to a question about offshore drilling, Buttigieg said he does not support it, preferring jobs that create an economy he would be proud to leave to the next generation.

“We need to hear the voice of people, especially in coastal communities and respond to them,” Buttigieg said. “In my administration our energy strategy will move away from offshore drilling.”

Strengthening infrastructure was also a concern.

“Without that we will not be able to grow our economy,” Buttigieg said. “There needs to be federal support and it’s part of our plan on infrastructure.”

A man in a wheelchair questioned Buttigieg about his plans to help people with disabilities.

Buttigieg said the country is shortchanging itself if people don’t unlock the abilities and contributions of people with disabilities.

“We’re going to make sure that we build a culture of representation where people who have disabilities are lifted up to positions where people can see them and be inspired by them,” he added.

“There are so many candidates, [but] when you hear them in person it makes a big difference,” Smith said. “Seeing them on TV doesn’t do it. I’ve known people who’ve changed their minds when they’ve heard a particular candidate at a meet-and-greet, or Q&A or town hall.”

After the meet-and-greet, Buttigieg was whisked away by his campaign staff to an event in Hartsville. Smith said she invited him to come back when he had more time to stay.