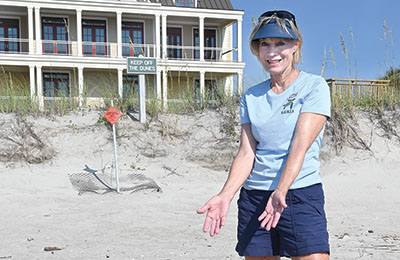 The hole in the sand was past Kathi Aderholt’s elbow. She thought it was deep enough.

The loggerhead, know as Gimpy to volunteers who monitor nests, is missing its left rear flipper. Aderholt was there to help.

“It’s a night that I will never forget,” she said.

Aderholt has been a volunteer with the DeBordieu chapter of the S.C. United Turtle Enthusiasts for a decade. A former English teacher, she said she discovered a love for nature after retiring to the area

SCUTE volunteers have been tracking Gimpy for more than 20 years, according to Betsy Brabson, who heads the DeBordieu chapter.

“She’s only got 50 percent capacity. She can’t get her chamber deep enough,” Brabson said. “She’ll crawl three or four times a night.”

This year, Gimpy has come ashore without nesting more than a dozen times.

“A lot of times, we’d come out in the morning and see her track. Our hearts were just broken for her,” Aderholt said. “We were just afraid that she had to be getting exhausted.”

An official with the state Department of Natural Resources told Brabson a volunteer could help a disabled turtle dig a nest by lying on the sand behind the turtle and digging with it. Brabson passed the information on to her volunteers.

“I read that once and laughed,” Aderholt said.

Although Gimpy doesn’t usually nest at DeBordieu, she had a false crawl near Aderholt’s house on July 8. Aderholt suspected Gimpy might come back so she was on the lookout the next night.

When Aderholt found Gimpy, she could tell that the turtle was struggling. Gimpy kept pushing sand back into the hole.

“She was getting nowhere,” Aderholt said. “After she put the sand down, I was trying to move a bunch of sand away so she wouldn’t be putting more back in.”

Gimpy then moved away from the hole and was still. That’s when Aderholt started digging. 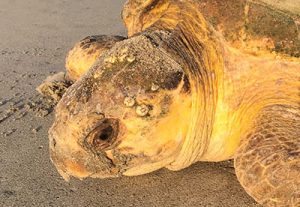 Volunteers named the turtle Gimpy because she is missing her left rear flipper.

She isn’t sure whether Gimpy was aware of her presence. She had a light with a red filter so she wouldn’t distract the turtle.

Aderholt reached hard coarse sand, but “powered through” and got through that to some better sand.

Gimpy then rejoined the effort, digging with her right flipper.

After about 40 minutes, Aderholt thought the hole had to be deep enough.

“She got down to where she could barely touch it,” she said. “She couldn’t go any deeper.”

That’s when nature took its course.

“There was a big heave, you could see the contractions,”  Aderholt  said. “She lifted up her flipper, and when she put it down, out shot an egg. I almost cried.”

She spent about two hours with the turtle. Gimpy filled in the hole by herself, compacted the sand with her shell and then scattered loose sand over the top. Aderholt walked with Gimpy on her journey back to the ocean.

“It was just such a euphoric relief to see the turtle finally give it up. It’s a remarkable story,” Brabson said.

Later that morning, volunteers moved the nest to the toe of the dune so it wouldn’t be washed by the high tide.

Aderholt plans to keep tabs on the nest so she can be there when it hatches.

“That would be so exciting to see her babies,” she said.

Turtles usually nest about every two weeks, so Aderholt is expecting Gimpy to return sometime next week.

“I’m kind of thinking since she had success, maybe she’ll come back,” she said.

“We usually have a slower season when we’ve had a lot of nests the year before because the turtles don’t come back every year,” said Mary Schneider, head of the Pawleys Island chapter. “They come back every two or three years.”

“For some reason, the turtles are not going a whole lot farther north than the middle of DeBordieu,” Brabson said. “I know Pawleys is kind of down and so are the other SCUTE beaches. Garden City is really down.”

South Carolina had its first hatch on Saturday on Kiawah Island.

Brabson expects it will be a couple of weeks before DeBordieu sees a hatch.

Due to the COVID-19 pandemic, DNR is not allowing public inventories this year.

“We’re going to do them in the early morning,” Brabson said. “There may be people who happen upon us, but we’re going to have to tell them to get back. It’s just going to be different and the public has just got to understand.”