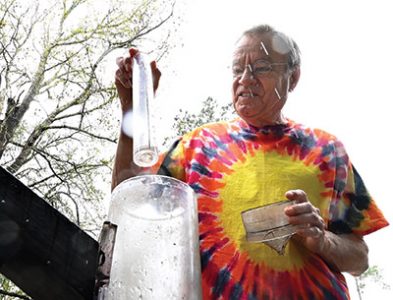 Hartmut Fege checks the rain gauge on his porch each morning at 7.

It rained on Thursday.

That was enough for most people. Others wanted to know more. So they had a look at their rain gauges the next morning at 7.

A gauge on Murrells Inlet reported 1.75 inches. A gauge on the west side of Bypass 17 reported .87 inches.

A gauge between Pawleys Island and Litchfield reported exactly an inch. One at Pawleys Plantation reported .85 inches.

There are two gauges at Heritage Plantation. One reported 1.02 inches; the other .95 inches.

All weather is local.

“We’ve all stood there on the street corner and looked in the distance and said, ‘It’s pouring over there,’” said Melissa Griffin, the assistant state climatologist. “It can be so variable, especially during summertime thunderstorms.”

Griffin is the state coordinator for a program designed to tract that variability: the Community Collaborative Rain, Hail & Snow Network. It’s known to its members at CoCoRaHS.

“It’s one of the most comprehensive citizen-science initiatives we’ve got in the U.S.,” Griffin said.

When Bob Ciminel moved to Pawleys Plantation in 2014 he didn’t need a rain gauge to know it was flooding. “I had water up to the back of my house. The ponds were overflowing,” he recalled.

After retiring from a 50-year career in commercial nuclear power, Ciminel set out to learn more about his new home, even though he had been coming to Pawleys Island every summer since he and his wife were married in 1971.

“All the environmental stuff is well out of my wheelhouse,” he said.

But he became a master naturalist through a Clemson University program, a volunteer at Hobcaw Barony, a guide on the Carolina Rover tours and a certified fishing instructor through the Department of Natural Resources.

“I felt like the east side of [Highway] 17 is the most sensitive because everything’s going into Pawleys Creek,” he said.

Most of the CoCoRaHS members in Georgetown and Horry counties are close to the coast, Griffin said. Each March, the participating states compete to recruit the most new members to the program. Griffin would like to fill in some gaps in the rural areas. “Precipitation is highly variable, and a dense network of observations can help provide detailed information on rainfall patterns,” she said.

There are 460 observers in South Carolina and nearly 20,000 in the U.S. and Canada. There are currently six on the Waccamaw Neck. The volunteers read their rain gauges every morning and enter the result into a database maintained by the Colorado Climate Center at Colorado State University.

Duane Draper, who lives in Litchfield Country Club, signed up a year ago. He heard about the program from Pete Little, the volunteer coordinator at Hobcaw, who is also part of the network. Draper and Little are both master naturalists.

“There weren’t that many sites in this part of the state,” he said. “I did it just to add to the database of rainfall information.”

Griffin figures that if participants stay in the program a year, they are hooked. The longer a person reports data from their location, the more valuable it becomes. With five years’ worth, the program can determine, “climate normal” conditions, she said. “Having those long-term records helps us.”

“They probably have you hooked as soon as you buy your accredited rain gauge,” Draper said.

That gauge is 4 inches in diameter and has an inner tube that measures an inch of rain in increments of a hundredth of an inch and an outer tube that measures 10 inches. It costs nearly $50, but is currently on sale for $34.25. It is certified by the National Weather Service, which supplements its data with information from CoCoRaHS.

The gauge is a little more expensive, Griffin said, but it is also more durable than many sold for home use.

Hartmut Fege, who lives at Pawleys Island, still has the gauge he bought when he became a CoCoRaHS member almost a decade ago.  It’s more accurate than the gauge on the digital weather station he also owns.

“I’ve checked it a few times. It may be off by a few 10ths of an inch,” Fege said of the digital gauge.

While the process is simple for the observers, the researchers don’t take it lightly. Fege recalled getting an email from the climate center questioning one of his reports.

“I was wrong. He caught it. I was impressed,” Fege said. “They do pay attention.”

The program was started in 1998 in response to a flash flood in Fort Collins, Colo. In addition to being used by meteorologists, the data is used for agriculture, stormwater management, utilities, mosquito control and emergency managers.

The number of volunteers usually increases after a major weather event, she said, such as the so-called “1,000-year flood” in 2015 and Hurricanes Matthew and Florence in 2016 and 2018.

But Griffin noted that it’s equally important to know when it doesn’t rain. Last week, the state designated 11 counties along the coast in “incipient” drought conditions, citing cumulative data from CoCoRaHS that showed some areas had only 50 percent of their normal rain since December.

The local observers said they tried to recruit other volunteers, but without much success. Griffin’s target is 50 new volunteers across the state this month.

Ciminel convinced Hobcaw Barony to join the program. University researchers on the property track weather data, but weren’t part of CoCoRaHS. He offered to buy the rain gauge for one new volunteer from this area this year. Anyone who wants to take him up on the offer can contact Griffin at griffinm@dnr.sc.gov.