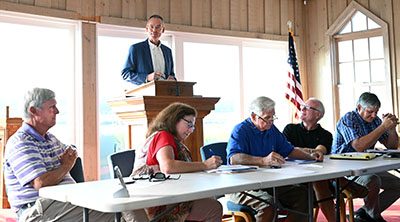 The number of registered voters jumped by 28 percent for next month’s Pawleys Island Town Council election, where the question of residency remains a contentious issue.

Mayor Jimmy Braswell faces opposition from Brian Henry in his bid for a second term as mayor. Henry and his wife own the Sea View Inn and were among the 37 people added to the town’s voter rolls before the Oct. 4 deadline. There are now 168 people registered to vote in the town, according to the Georgetown County Board of Voter Registration and Elections.

“One of the most important things to me is there is an increased belief that my opponents are pushing for: ‘if you are not a full-time resident, you should not be able to vote and have a role in our elections,’ ” Henry said.

Braswell raised the issue of residency at a Town Council meeting in August, the same day Henry filed. He asked the town attorney for information. Council members got a memo from the attorney, David DuRant, explaining the state law, but the issue didn’t appear on the council agenda.

That led Harold Wyatt to hire Butch Bowers, a Columbia attorney who is the former chairman of the state Election Commission, to get advice. “As a property owner and voter that does not reside on Pawleys Island year-round, it got my attention,” Wyatt wrote in an email to Town Council, “and I felt compelled to get educated on this subject as quickly as possible.”

He offered to bring Bowers to the island to talk to council. Braswell refused.

“A lawyer hired by you would be clearly biased towards you and my opponent,” Braswell told Wyatt in an email.

Council Members Rocky Holliday, Guerry Green and Ashley Carter agreed to call a special meeting last month to hear from Bowers. Braswell pointed out that Holliday and Green had Henry’s campaign signs in their yards. He added his attorney, Billy Jenkinson, to the agenda.

Braswell said afterward that Wyatt’s email contained the logo of Palmetto Cheese, one of Henry’s businesses. That was confirmed by a review of emails obtained under a Freedom of Information Act request.

In his email to the town, Wyatt also said that his concern was prompted by a visit from a candidate who told him and his wife that residency was the top issue in the election.

Council Member Sarah Zimmerman told her colleagues that she raised the issue in a visit to the Wyatts, but told them “residency was one of our priorities but not the number one issue.”

Zimmerman also questioned whether Bowers would provide an impartial opinion since Wyatt had a “commitment” to Henry.

State law requires candidates to be voters in the jurisdiction where they are running for office. To be a voter, they must declare their “domicile,” which the law defines as “a person’s fixed home where he has an intention of returning when he is absent.” The law lists several factors to consider when determining that intention, but they are not exclusive. One factor is property ownership.

“People are watching this election closely,” Henry said. Property owners want to have a voice in the town’s affairs. “This election and future elections,” he said.

During the special meeting last month, Braswell cited the town’s articles of incorporation and noted they refer to Town Council members as full-time residents. The first council, elected in 1985, included two members who owned houses off the island. One of them, Paige Oberlin, owned the Sea View Inn.

Among the current council, Carter and Green have homes off the island, but declare their island property as their domicile.

“People who have owned property on Pawleys Island for generations understand what is at stake here,” Henry said.

Braswell, who has also been a non-resident property owner, said the council has always tried to look out for the interests of those constituents. “South Carolina laws are too ambiguous,” he added, referring to voter residency. “We could have somebody who lives in Greenville as mayor.”

The real issue at the heart of the opposition, Braswell said, is the proposal for creating a new beach access near the east end of the South Causeway. It was rejected by the council in a closed session in 2018, but revived by an ad hoc finance committee appointed this year to look at ways to raise money for beach renourishment. State and federal funds for such projects are contingent on public access and there is none in the middle of the island.

Henry was among about a dozen people who showed up at a committee meeting to oppose the access proposal. “If you’re going to put a mid-island access, what else are you willing to do?” he said. “Where does it stop?”

The idea isn’t practical, Braswell said. “In the end, it would cost more and change the nature of the island,” he said. “But it had to be looked at.”

“There were people that were trying to hide that,” Braswell added.

Bruce Bailey, who owns the Pawley House near the site of the proposed access, told the town he would go to court to fight the proposal. He and his wife and two voting-age children were among those who registered to vote in next month’s election. He declined to comment.

Gary Cooper, who has a house on the north end of the island, told the council at the special meeting “we’re all here because we’re unhappy; one side or the other.”

“I would like you guys, as a taxpayer, to eliminate litigation, eliminate controversy,” Cooper said. “What can we do to hold our Town Council accountable?” “You can vote,” Bowers told him.

Cooper and his family, who own four houses on the island, now represent 7 percent of the island’s voters. Eleven of them registered before the October deadline. He could not be reached for comment.

Jody Tamsberg and his wife changed their voter registration from Georgetown to Pawleys Island. “There are some serious considerations that affect me, beach renourishment, the creek,” he said. “You can’t hardly fish in the creek.”

Tamsberg echoed what other property owners have said, that two votes on Pawleys Island have more influence than in a larger municipality. He was the only one willing to talk on the record.

While he doesn’t have political aspirations, “there are differing opinions on how Pawleys is shaping up,” and he would like to have a say. “Pawleys is near and dear to my heart.”