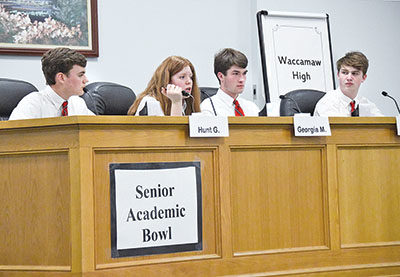 Waccamaw High School extended its streak of Senior Academic Bowl wins to six last week by sweeping through this year’s tournament at the Beck Education Center.

Waccamaw outscored its opponents 65-27. Twenty-three of those points were in the two games against Georgetown.

“Georgetown/Waccamaw is always a close game,” Loftus said. “They are our rivals in this competition.”

The night before the event, the Warriors lost twice to a group of teachers in practice games. Coach Brad Kibler said that motivated his team.

“I think getting beat twice by the teachers and getting crushed in the lightning rounds by the teachers, they realized what was done to them,” Kibler said. “So they were able to them learn a lesson from it. It was a whole school effort.”

The Senior Academic Bowl is a double-elimination tournament that features teams from the county’s four high schools. Each game has two, six-minute rounds plus a two-minute lightning round. If the game remains tied, the teams play another two-minute lightning round. Teams are quizzed on five subjects: math, English, social studies, science and the humanities. The tournament ends when one team has only one loss.

Waccamaw faced off against Carvers Bay in game one. The Warriors led 5-3 after round one and then held the Bears scoreless in round two and to only one point in the lightning round to win 25-4.

Waccamaw then had a break of nearly an hour as the other schools battled it out. Kibler took his team to another room to relax. He was the only coach that did that.

“We went out and cut up, and laughed and had some soda,” Kibler said. “I have watched too many teams get super tight just sitting in [the competition room]. It’s just kind of droning and numbing almost. … Right before we came in I told them what I wanted to do and what I wanted to see them try to do. And they did it.”

“[We were] relaxing, going over strategy, making sure everything was working, looking over pointers,” Loftus said. “If there’s anything that needs to be fixed we do that.”

“We were just kind of hanging out. It helped us relax,” said Georgia Mattar. “I didn’t feel like I was in high stakes competition.”

Waccamaw and Georgetown then faced off as the only two undefeated teams in game four.

The Warriors scored four out of the first five points, but then had to hold off the Bulldogs to hold onto a 5-4 lead at the end of round one.

Waccamaw built a 9-5 lead thanks in part to Mattar knowing that the National Cherry Blossom Festival took place in Washington, D.C., and tango was a ballroom dance that rhymed with a tropical fruit, and Loftus knowing that foreclosure happens when property owners don’t make mortgage payments.

The Bulldogs tied the score by knowing that a false lead in a mystery novel is also called a red herring and Martin Luther King Jr. gave the “I Have a Dream” speech at the Lincoln Memorial in 1963. As the bell for the end of the round sounded, Loftus knew that the world’s largest submarine fan is in the Bay of Bengal. His correct answer gave Waccamaw a shot at a bonus question, and the correct answer to the type of reproduction in which the offspring inherits the genes of just one parent gave the Warriors two more points. Those final three points after the bell proved to be the difference in the game as each team scored four points in the lightning round, giving the Warriors the 16-13 victory.

Georgetown then beat Carvers Bay 13-11 in game five to earn a berth in the championship game. Because Waccamaw was undefeated, the Bulldogs would have to beat the Warriors twice to win the title.

Mattar scored the first two points of the game by knowing that Australia was founded in 1788 and the liver was the body’s second largest organ to help Waccamaw take a 3-1 lead at the end of round one.

Georgetown then outscored Waccamaw 8-5 in round two to take a 9-8 lead. The Bulldogs tied the score early at 4-4 by knowing what New York river Capt. Sully Sullenberger landed his airplane on and took the lead by knowing that the first photograph of Machu Picchu was taken in 1912. The Warriors scored the final three points of the round when Loftus knew that extremophiles is the collective term for organisms that survive in highly acidic or radioactive environments, and that chronic traumatic encephalopathy was found in NFL’s players brains.

Helped by two wrong answers by Georgetown that gave them two points, the Warriors rebounded in the lightning round for the 14-10 victory and the championship.

Benjamin Taylor of Georgetown had the most correct answers in the tournament with 21. Loftus was second with 14, Mattar had 13, Justin Fuentes of Georgetown had 10, and Joseph Cooper and J.D. Donmoyer of Carvers Bay had nine each.

“I had a really good game today,” Mattar said. “I work well under pressure. I like competition.”