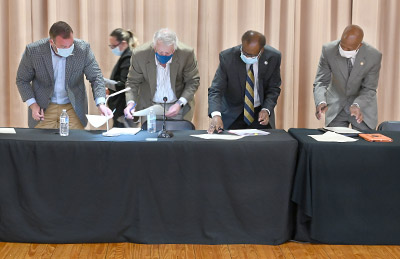 Waccamaw Neck will continue to have a resident state senator under a redistricting plan proposed by the Senate staff.

State Sen. Stephen Goldfinch, a Murrells Inlet Republican, said the plan is an improvement over the initial draft that drew the southern boundary of Senate District 34 just below his house.

“The one that they said was going to be the final map did not include any of Litchfield or Pawleys,” he said.

The legislature is drawing up new districts for itself and the U.S. House of Representatives following the 2020 Census. The state House went back into session to start debate over its new district maps this week. The Senate is due to return next week.

Senate District 34 grew to 136,286 people over the last decade. Only three others among  the 46 Senate districts had larger population growth.

Sen. Ronnie Sabb, a Kingstree Democrat, represents the western portion of the county. His District 32 was more than 21,000 people below the target population of 111,270 for Senate districts.

The staff plan, one of 14 proposed to the Senate Redistricting Subcommittee, puts the population of District 34 at 116,546. That’s just over 5,200 more people than the target population, but within the goal of ensuring that there is no more than a 10 percent difference in Senate district populations.

The proposed district starts in Horry County, where it takes in Socastee and Surfside Beach, and stops at Winyah Bay. The current district runs into Charleston County.

“I always considered the Waccamaw Neck to be my people,”Goldfinch said.

It is what the redistricting process defines as a community of interest.

“We’re totally missing the mark,” he told the subcommittee and staff.

“Now that I have the Waccamaw Neck back, I can live with it,” he added.

House District 108, held by Rep. Lee Hewitt, is due to pick up two precincts in the city of Georgetown under the draft plan. He will lose the town of Mount Pleasant. The district will continue to cover all of the Waccamaw Neck.

Rep. Carl Anderson, a Georgetown Democrat who represents the western portion of the county, was short by just over 6,800 people of the target population in his District 102.

“To me it’s good because I will have more of Georgetown,” said Hewitt, a Murrells Inlet Republican. “That’s my home county.”

He will retain the town of McClellanville and parts of Awendaw under the draft plan.

“It’s coastal and we share a lot of the same concerns,” Hewitt said.

What’s still unclear is whether the two legislators from the Waccamaw Neck will have an equal say in delegation votes. A 1999 federal court ruling requires that votes of the county legislative delegations be weighted according to the number of people the lawmakers represent. Under the current districts, that balance rests with Sabb and Anderson.

Neither Goldfinch nor Hewitt are sure if that will change. The Waccamaw Neck has 43.5 percent of the county’s population in the 2020 Census.

“With the exception of the last delegation meeting, it’s never been a factor,” Goldfinch said of the weighted voting.

The members were split this spring over the nomination of James Sanderson to the county Board of Voter Registration and Elections. He was approved with the support of Sabb and Anderson because they represent 58.4 percent of the county’s population.

Goldfinch doesn’t expect the plan adopted by the Senate to differ much from the staff plan.  In the House, “there’s still going to be some movement,” Hewitt said, but he doesn’t know if that will include his district and Anderson’s.

The legislature is expected to adopt the redistricting plans this month, allowing time for legal challenges before filing for candidates opens in March.