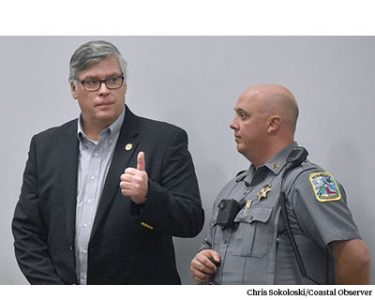 Sheriff Carter Weaver acknowledges a supporter while waiting to address the school board this week.

Carter Weaver won election as Georgetown County sheriff with 91 percent of the vote in polling this week. He has less than six weeks to bask in victory before he gears up for the next election.

Filing opens March 16 for candidates seeking their party’s nominations for local and state offices in the November election, including the sheriff. The primaries are June 9.

Weaver beat Darryel Carr in the Republican primary in December with just under 80 percent of the vote. This week, he faced a write-in challenge from Birt Adams, a former New York City corrections officer who lives in Plantersville.

“I didn’t do the level of campaigning,” Weaver said on the eve of the voting, but added, “we’re not taking anything for granted.”

Turnout in the special election was 8.8 percent, about half what it was for the GOP primary.

In the nine Waccamaw Neck precincts, which account for 49 percent of the county’s voters, the average turnout was below 7 percent.

Poll workers said some voters were confused by the write-in and expected to see Adams’ name on the ballot. By law, the poll workers can’t provide information about candidates, not even their names.

Adams ran for sheriff in 2016 as an Independent Party candidate against Cribb, a Republican, and Carr, who ran as a Democrat. This year, Adams filed to run as a Democrat. But he failed to meet the two-week deadline to turn in an affidavit to the county Democratic Party that showed he had the law enforcement qualifications to hold office. The county election commission voted not to place his name on the ballot.

Weaver got 3,510 votes in Tuesday’s balloting. There were 332 write-in votes. Whether those were all for Adams is unclear.

“We only do the write-ins if they exceed a certain threshold,” said Dean Smith, who chairs the county Board of Voter Registration and Elections. He is checking with the state Election Commission to find out if the 332 votes need to be tallied.

Write-in votes outnumbered votes for Weaver in two precincts: Dreamkeepers in Georgetown and Myersville in the Plantersville area. Seven of the county’s 34 precincts had no write-in votes.

This week’s election was the second time new voting machines were used county-wide. They record votes on a paper ballot that is scanned to produce the result and saved as a backup.

“As a test of the equipment and the system we use, it went extremely well,” Smith said. “The workers felt very good about it.”

With the election over, Weaver said he will name a new assistant sheriff. He met with his top pick last weekend to make sure they shared the same vision for local law enforcement.

“It’s going to make sense,” Weaver said, when the announcement is made.

He has also met with county officials to press for a decision on repairing or replacing the county jail, which opened in 1993. The cost is estimated at $26 million to $36 million. The county currently has $36 million listed in its capital improvement plan for the jail.

While the sheriff runs the jail, Weaver said he could turn that responsibility over to the county. “If it’s not addressed, I will have no other choice,” he said.